It’s been a few years since the Institute of Electrical and Electronics Engineers (IEEE) introduced the IEEE 802.3cg-2019 single-pair Ethernet (SPE) 10 Mb/s standards. There’s been a lot of industry activity and collaboration surrounding the technology since then — so we thought it would be a good time for an update on the status of Single-Pair Ethernet (SPE). 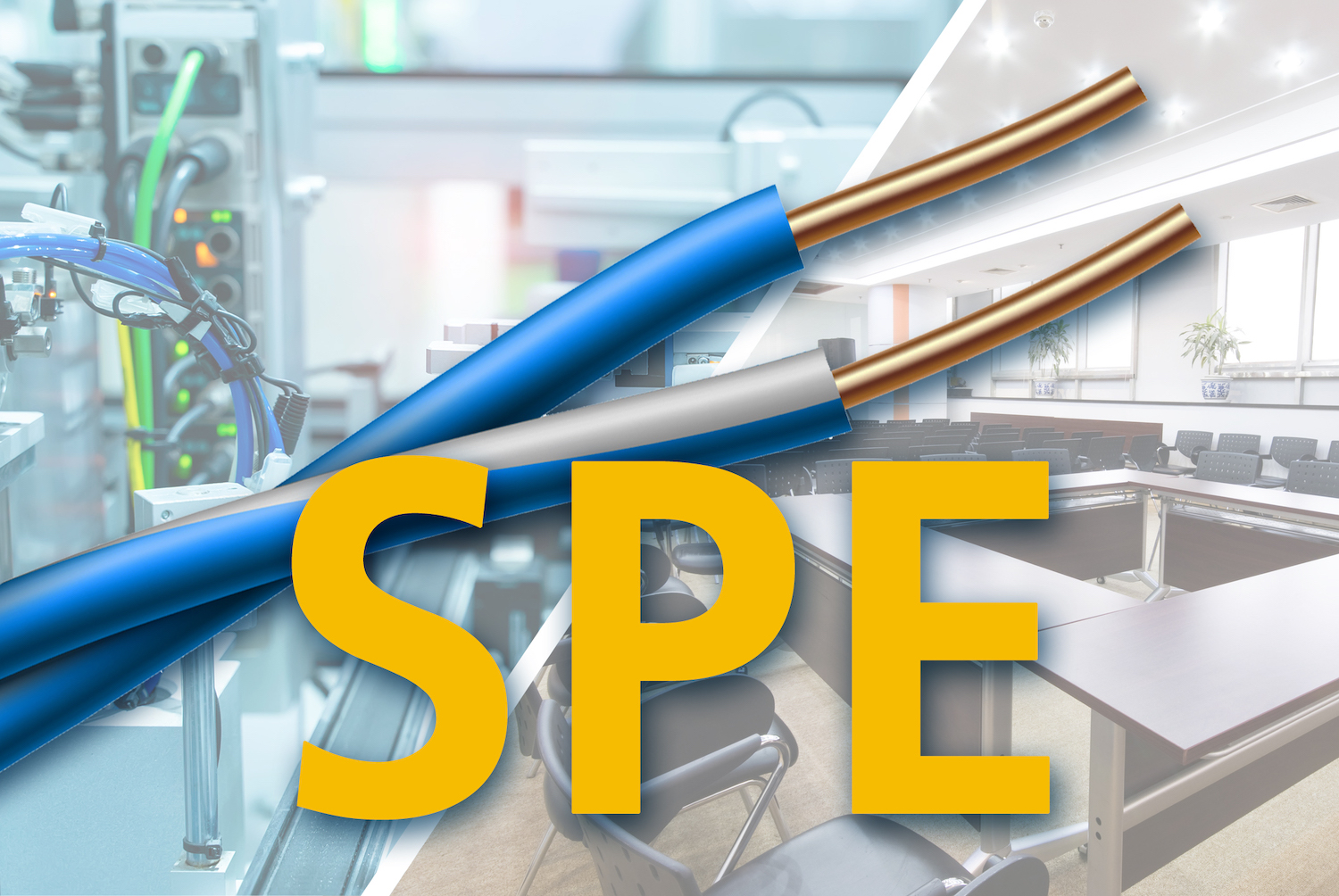 Several alliances and consortiums were formed in response to the development of the IEEE 802.3cg standard. The Telecommunications Industry Association (TIA) formed the Single-Pair Ethernet Consortium (SPEC), comprised of several leading commercial cabling and testing equipment manufacturers, including Fluke Networks. Similarly, the Single-Pair Ethernet System Alliance (of which Fluke Networks is also a member) comprises several industrial and building automation device manufacturers, as well as cabling and connectivity vendors that operate more in the industrial space. There’s also the Single-Pair Ethernet Partner Network and plenty of SPE sub-groups and committees within several other industry associations, both on the industrial and commercial building automation side. Leading suppliers also developed Ethernet-APL (Advanced Physical Layer) for harsh processing environments based on the 10BSE-T1L. Within these various initiatives, activities include everything from education, market awareness, and standards assurance to developing device and cabling ecosystems, standards, and specifications — all of it aimed at accelerating the adoption of SPE in support of IoT/IIoT in both operational technology (OT) and information technology (IT) networks.

While some of these initiatives are new, SPE technology has been around for several years. IEEE introduced SPE standards 802.3bw 100BASE-T1 in 2105 and 802.3bp 1000BASE-T1 in 2016, supporting up to 40m over a single pair of shielded (STP) cable and up to 15m over unshielded (UTP) cable. These SPE applications are primarily deployed in the automotive industry to support in-car communications. Once the 802.3cg 10BASE-T1S/L standards in were introduced in 2019, SPE was no longer viewed as niche; new opportunities opened up for SPE deployments to support a broader range of industrial and commercial applications.

Following the release of 802.3cg, the International Electrochemical Commission (IEC) and the International Organization for Standardization (ISO) developed the series of 63171 connector standards and 61156 cabling standards for both commercial (MICE1) and industrial (MICE2 and MICE3) applications. Both ISO/IEC and TIA cabling standards refer to MICE tables for environmental classifications, where M is mechanical (flex, vibration), I is Ingress (moisture), C is Climatic (temperature), and E is Electromagnetic (noise). SPE in the industrial environment relates to MICE Levels 2 and 3, while the commercial environment relates to MICE Level 1. (Learn more about MICE levels in Industrial Ethernet Cable Problems.) 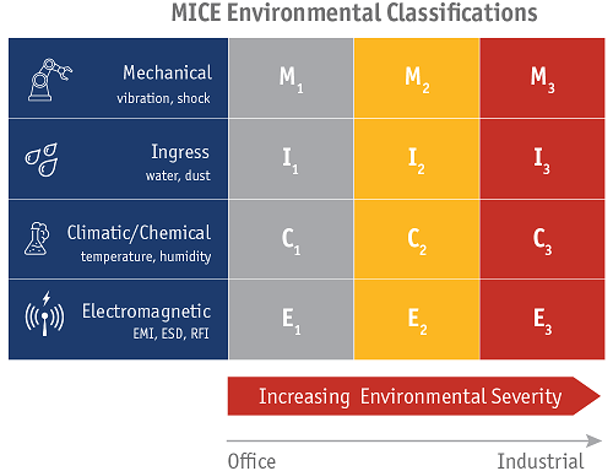 In MICE classifications, M stands for mechanical, I for ingress, C for climatic, and E for electromagnetic.

The release of 802.3cg was followed by incorporation of SPE into the ISO/IEC 11801 series of cabling infrastructure standards. In 2022, TIA released the ANSI/TIA-568.5 SPE component standard for commercial environments in alignment with ISO/IEC, and SPE is also being incorporated into the TIA-1005 standards for industrial cabling and the TIA-862 standards for intelligent buildings. Work is also underway in the TR-42.9 industrial cabling work group on the development of ANSI/TIA-568.7 standards for balanced single twisted-pair for industrial premises. Both ISO/IEC and TIA cabling standards for SPE recommend the LC-style connector from CommScope for commercial environments and the T1 connector from Harting, but also permit other IEC-approved (i.e., 63171) connectors.

Market Adoption of SPE Is on the Rise

Now that application and cabling standards are available, the SPE market is ramping up. In fact, a study published recently by The Insight Partners predicts that the SPE market will grow to US$3.6B by 2028. That’s good news for cabling manufacturers that have been developing solutions to support SPE as they gain momentum in industrial and building automation deployments and offer solutions for SPE deployments outside of the in-car automotive and industrial processing applications that are already starting to be installed.

Further market growth requires adoption of SPE by active equipment and device manufacturers — both at the application and I/O level — and many now have SPE on their product roadmaps. For both industrial and commercial environments, that includes SPE switches and edge devices like programmable logic controllers (PLCs) sensors, actuators, meters, and even robots. The adoption of SPE among equipment and device manufacturers will ultimately enable fast, easy plug-and-play deployments in both factories and smart buildings.

While market adoption is moving slower than standards development, it typically takes several years after PHY specs are published to develop products, which is why we’re just starting to see solutions now hit the street. The building operational technology industry also takes time to pick up on new trends, due to the critical nature of these systems and the need for comprehensive testing and validation. In the case of SPE, COVID-19 has also impacted investment in new technologies and created supply chain challenges.

Fluke Networks Has a Keen Eye on the SPE Market

While the migration to SPE is a long-term strategy, we’ll soon see a much broader range of devices coming to market in response to OT departments shifting away from multiple, disparate, and often proprietary systems toward Ethernet-enabled interoperability and integration that improves productivity and operational efficiency.

In the industrial space, for example, there’s a growing need to integrate devices at the very edge of the automation field/IO level into the existing Industrial Ethernet environment in support of Industry 4.0 and IIoT initiatives like artificial intelligence, machine learning, and machine-to-machine communications. Here, SPE will deliver the advantage of standards compliance, greater bandwidth and distance, reduced cable cost and weight (and associated space), and the ability to deliver remote power via power over data line (PoDL) technology, eliminating the need for separate power infrastructure.

In commercial environments, SPE will offer similar cost and power benefits, along with the ability to integrate building automation systems with other OT/IT systems (e.g., security, lighting, etc.) in support of IoT and smart building initiatives such as smart sensors, metering, data analytics, predictive maintenance, and more.

While there’s not yet significant market demand for SPE field testing, Fluke Networks has kept a keen eye on the market since we previewed SPE testing following IEEE’s release of the 802.3cg 10BASE-T1S/L standards. We’re continuing to participate in industry standards groups as well as SPE alliances and consortiums, and we’re collaborating with a range of equipment and device vendors in driving the adoption of this technology. As SPE installations ramp up, we’ll be ready to support testing and troubleshooting.

In the meantime, Fluke Networks’ DSX CableAnalyzer™ Series and LinkIQ™ Cable + Network Tester with support for industrial M8, M12D, and M12X connectors are ideal for testing and troubleshooting the two- and four-pair Ethernet cables used in current industrial applications like PROFINET, EtherNet/IP, and EtherCAT.

Questions? Talk to an expert