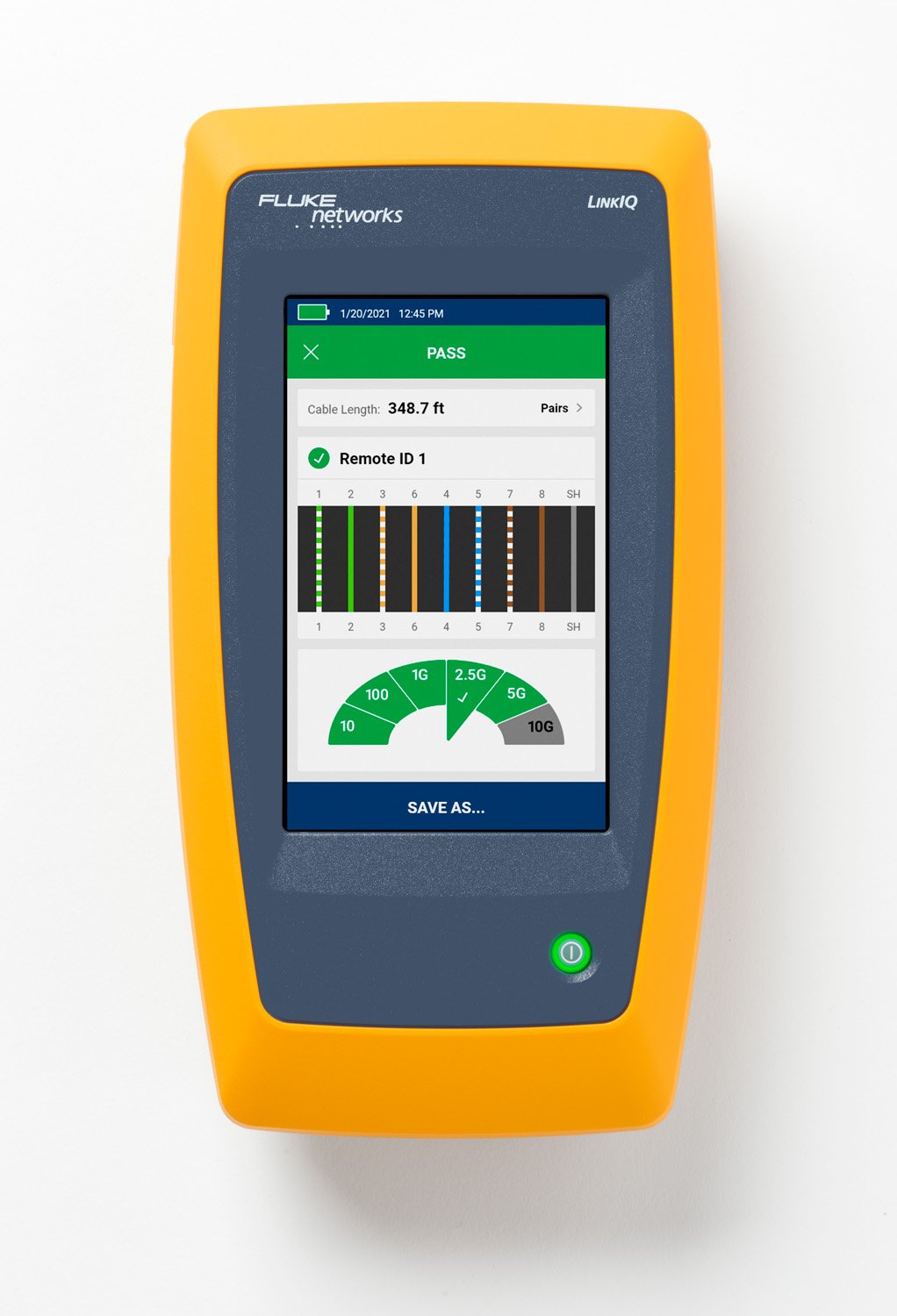 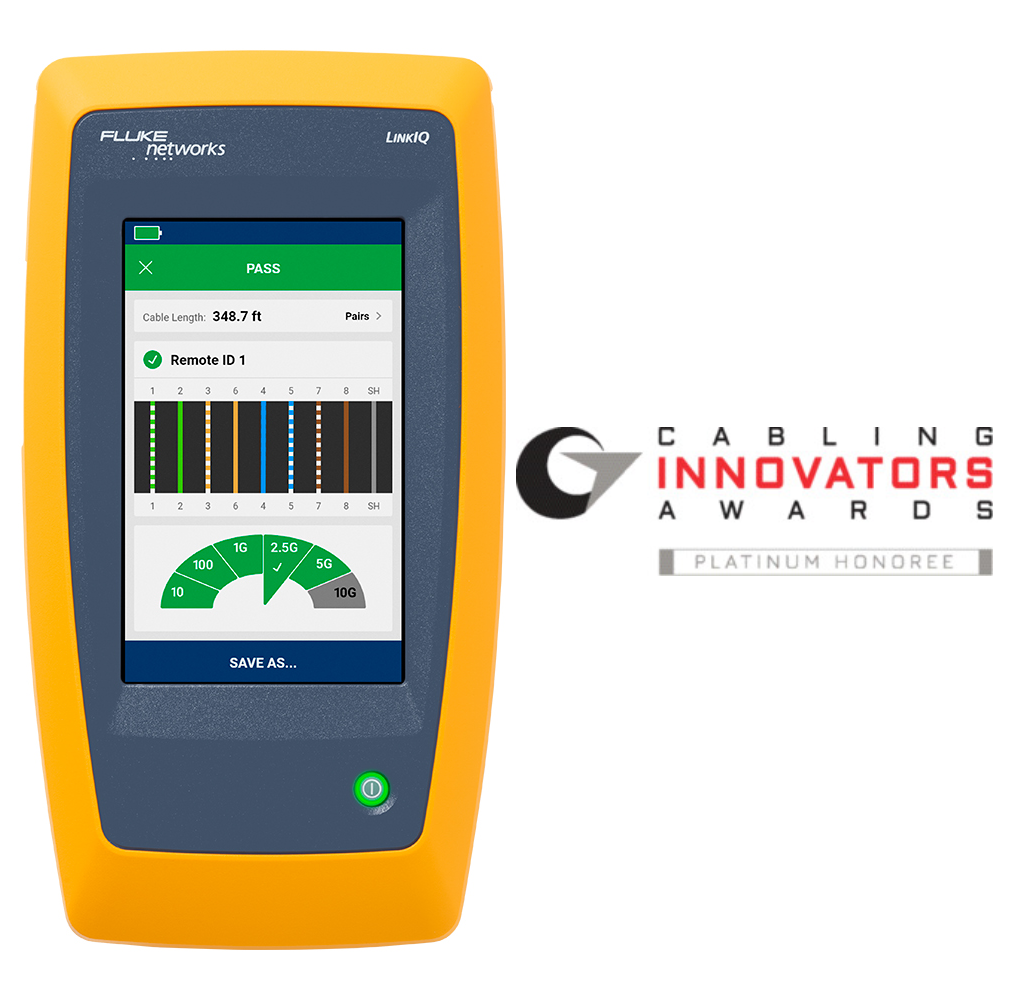 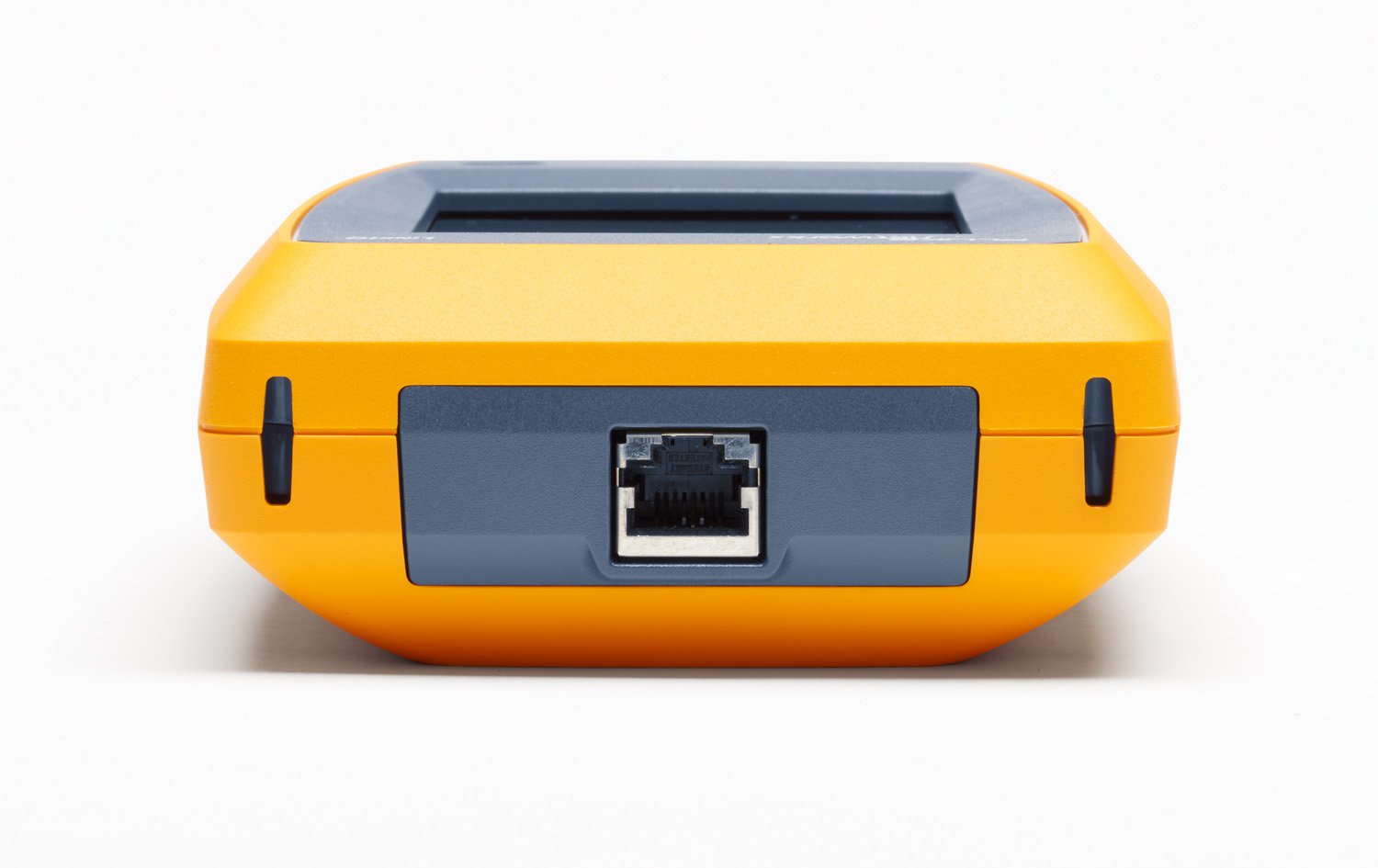 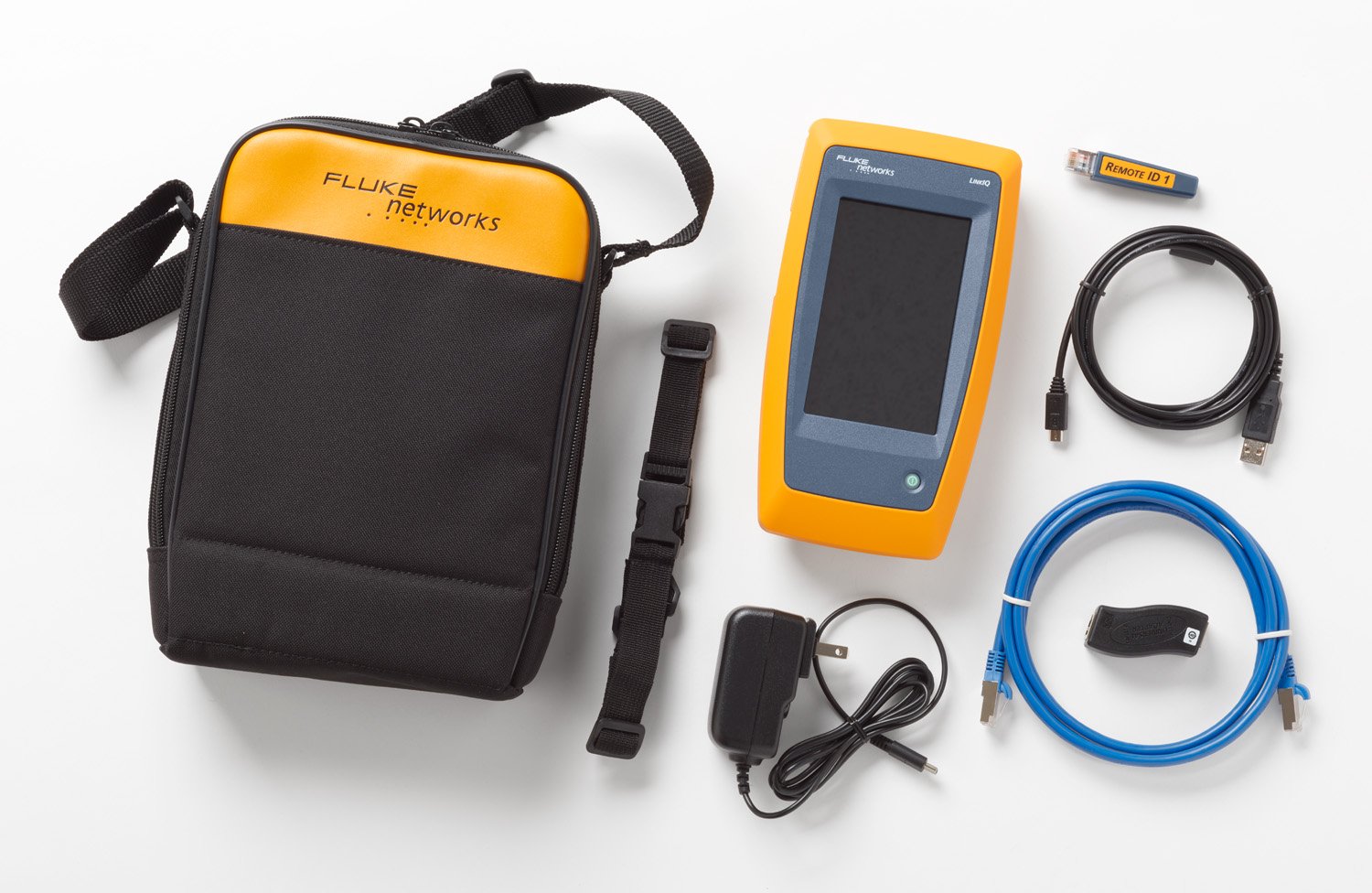 The LinkIQ™ Network+Cable Tester is designed to provide trusted cable testing along with network testing professionals need to do their jobs. LinkIQ™ validates cable performance (up to 10 Gig) using frequency-based measurements and provides distance to fault information along with a wire map of the cable under test. The LinkIQ™ also performs ping tests to verify connectivity and nearest switch diagnostics to identify key network issues and validate switch configuration eliminating the need of using another device. Additional features include, Analog and Digital Toning, Port Blink, Remote Office Locators, and the ability to manage results via LinkWare™ PC.

The LinkIQ is capable of measuring lengths up to 1000 feet (305 m) and provides distance to faults such as opens, shorts, and unterminated cable. Using the remote ID allows for a complete wire map of the cable pairs which helps identify miswired and split pairs. The primary cable testing feature of LinkIQ is the cable performance test which qualifies the cabling bandwidth from 10BASE-T to 10GBASE-T (10 Mb/s up to 10 Gb/s). It performs these tests via frequency-based measurements. Using IEEE-standards-based measurements ensures that tested links meet performance requirements as opposed to transmission testers which only prove that the specific test devices can communicate over the link.

Operators may set performance requirements from 10 Mb/s to 10 Gb/s for a simple pass/fail indication. 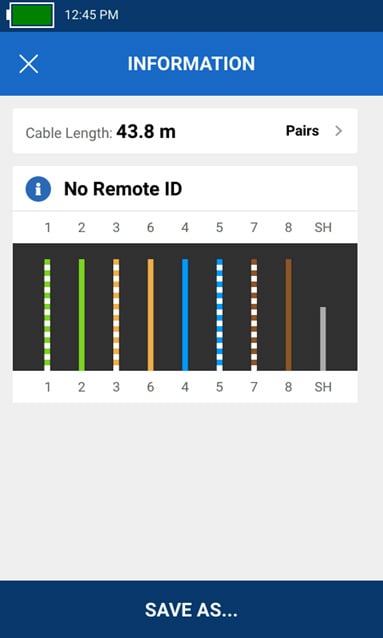 Cable test without remote attached shows length and pairing of each wire. 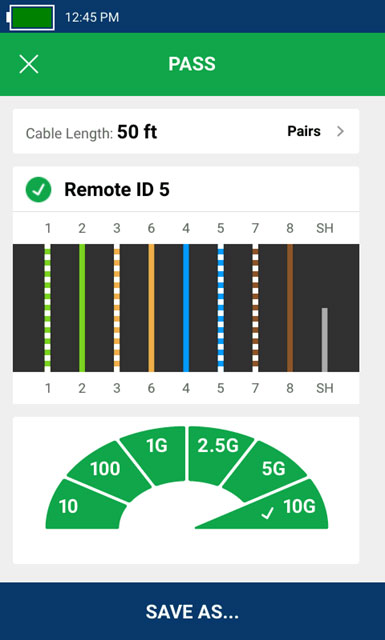 Cable test with remote attached shows remote ID number 5, length and pairing of each wire and cable performance of up to 10 Gbps. ​ 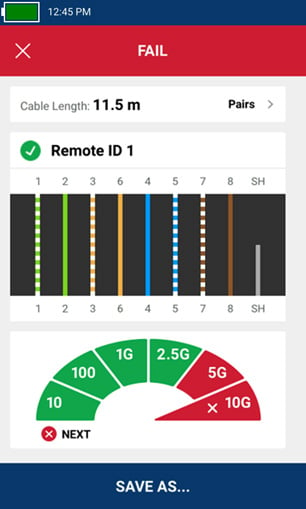 Cable test with remote attached shows remote ID number 1, length and pairing of each wire and cable performance of up to 2.5 Gb/s but failed the test due to a user-set limit of 10 Gb/s performance. ​

Along with the robust cable testing features, the LinkIQ also provides detailed information on the nearest connected switch and connectivity testing with IP ping. The LinkIQ negotiates with the switch to identify the advertised data rate (up to 10GBASE-T), half/full duplex identification, the switch name and IP address, port number, and VLAN info. 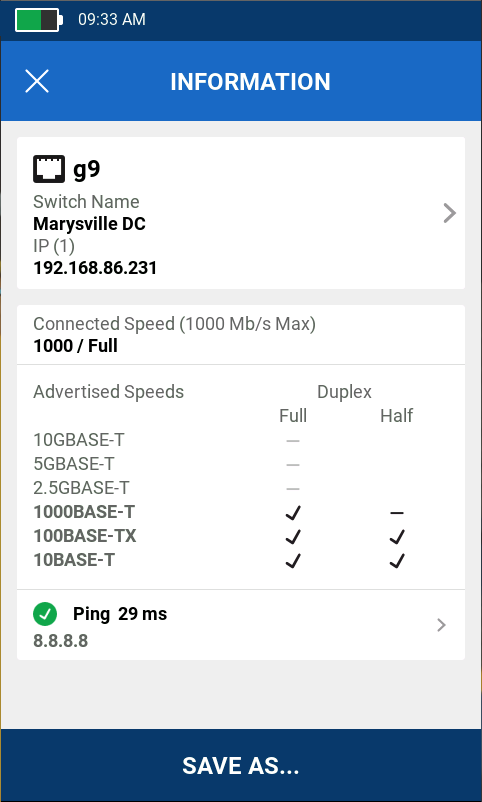 Switch port test shows switch name and IP address, connected port, and VLAN along with advertised speed and duplex settings. If a ping test is configured, the target address and maximum response time are shown.  Scrolling down shows Power over Ethernet results

The ping test verifies connectivity to devices on the local network or the internet and supports both IPv4 and v6.  The LinkIQ’s address may be set up manually or through DHCP. Once set up, the ping test is run as part of the Autotest when a switch is detected.  Results of the ping test include identification and response time of each of four pings to the target, the DNS server and gateway. 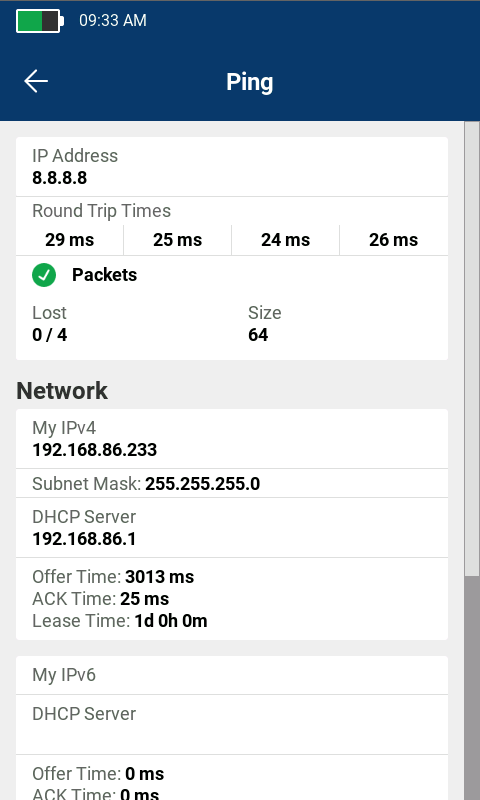 While Power over Ethernet makes installation of devices such as security cameras and access points simpler, a survey by the Ethernet Alliance of over 800 installers, integrators and end users found that four of five respondents experienced difficulties in integrating PoE systems.  Part of this can be traced to the fact that the IEEE offers three PoE standards, the term “PoE” is not registered and there are a variety of non-standards-compliant implementations as well

To simplify PoE installation and troubleshooting, the LinkIQ displays the pairs where power is provided, including the different power levels and pairs for dual-signature implementations.  Further, the LinkIQ will actually place a load on the connection to ensure that the advertised power is actually being delivered by the switch across the cabling infrastructure. The LinkIQ has been certified by the Ethernet Alliance to IEEE-802.3™ PoE standards for reliable multivendor interoperability. 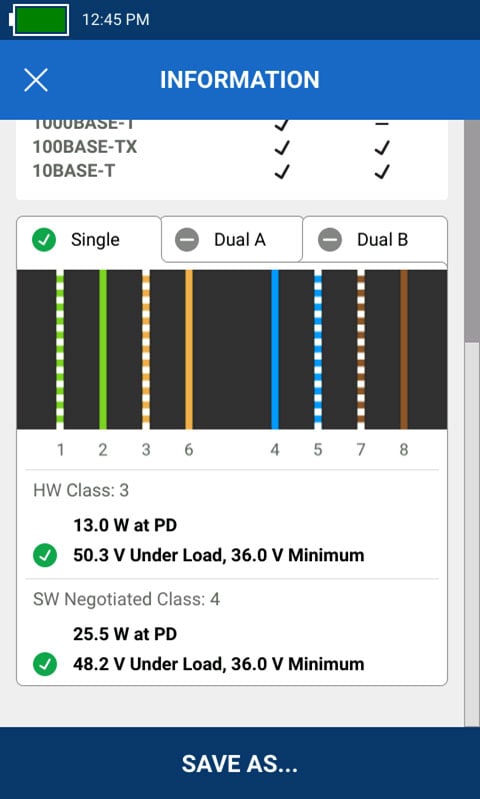 The LinkIQ provides complete documentation abilities for the tests it performs.  Up to 1,000 results can be stored in the tester with descriptive names and recalled.  Test names and numbers automatically increment as each is saved (“Annex B-1”, “Annex B-2”, “Annex B-3”, etc.) saving lots of time when testing cable in sequence.

Report data may be exported to a PC for documentation purposes.  The LinkIQ uses LinkWare™ PC, Fluke Networks’ reporting software which supports a variety of testers going back 20 years and is the industry’s de facto reporting solution with tens of thousands of active users. LinkWare can be used to store the results as well as generate PDF reports. 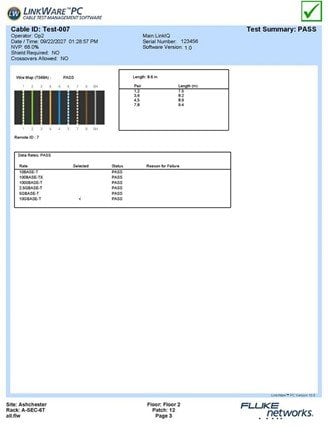 Like today’s smartphone, the LinkIQ is based on a gesture-based touchscreen that takes up nearly all the face of the instrument.  This makes it easy to display a large amount of information and provide clear, simple controls such as sliders and a full keyboard. While the LinkIQ can perform a variety of tests, the user interface is simplified so that there is a single TEST function.  The results displayed are determined solely by what is connected to the unit’s single “RJ-45” connector. A single USB-C port provides connectivity to a computer for future software updates, reporting, and charging the unit. Like other Fluke Networks products, the LinkIQ is designed and tested in our environmental lab to ensure its ruggedness including vibration, temperature, humidity, electrostatic discharge and drop tests.

1 Year of Gold Support for one LinkIQ mainframe

3 Years of Gold Support for one LinkIQ mainframe

LinkIQ address, DNS Server, Gateway for IPv4 or v6 either manually or via DHCP.

Blink the light of the connected port

By Panduit and Fluke Networks 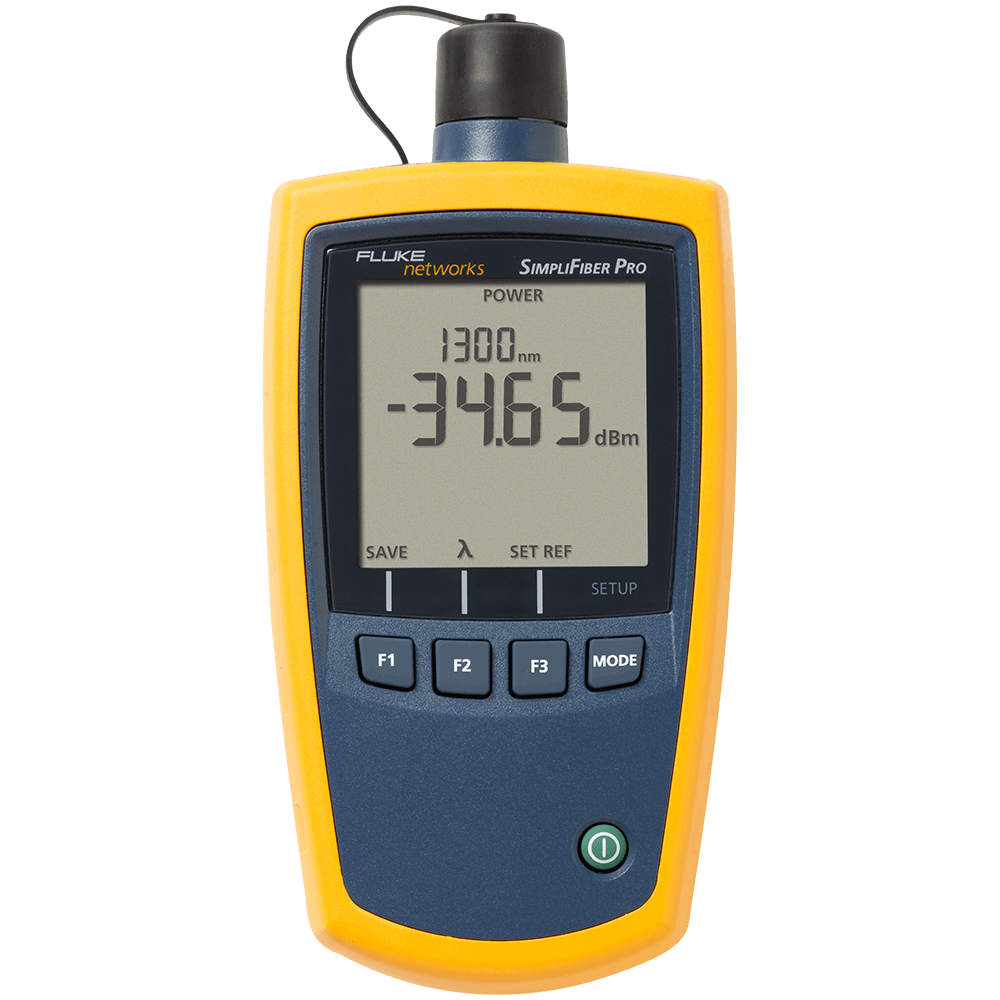 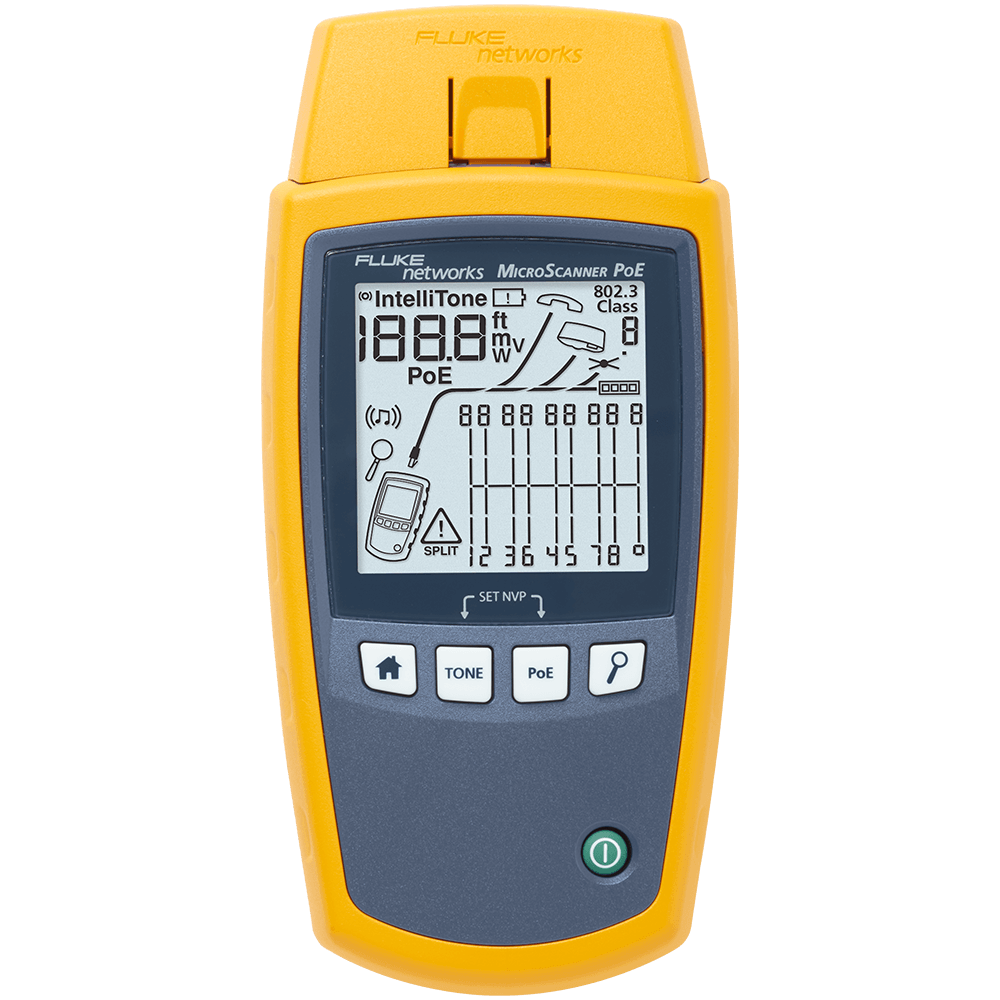 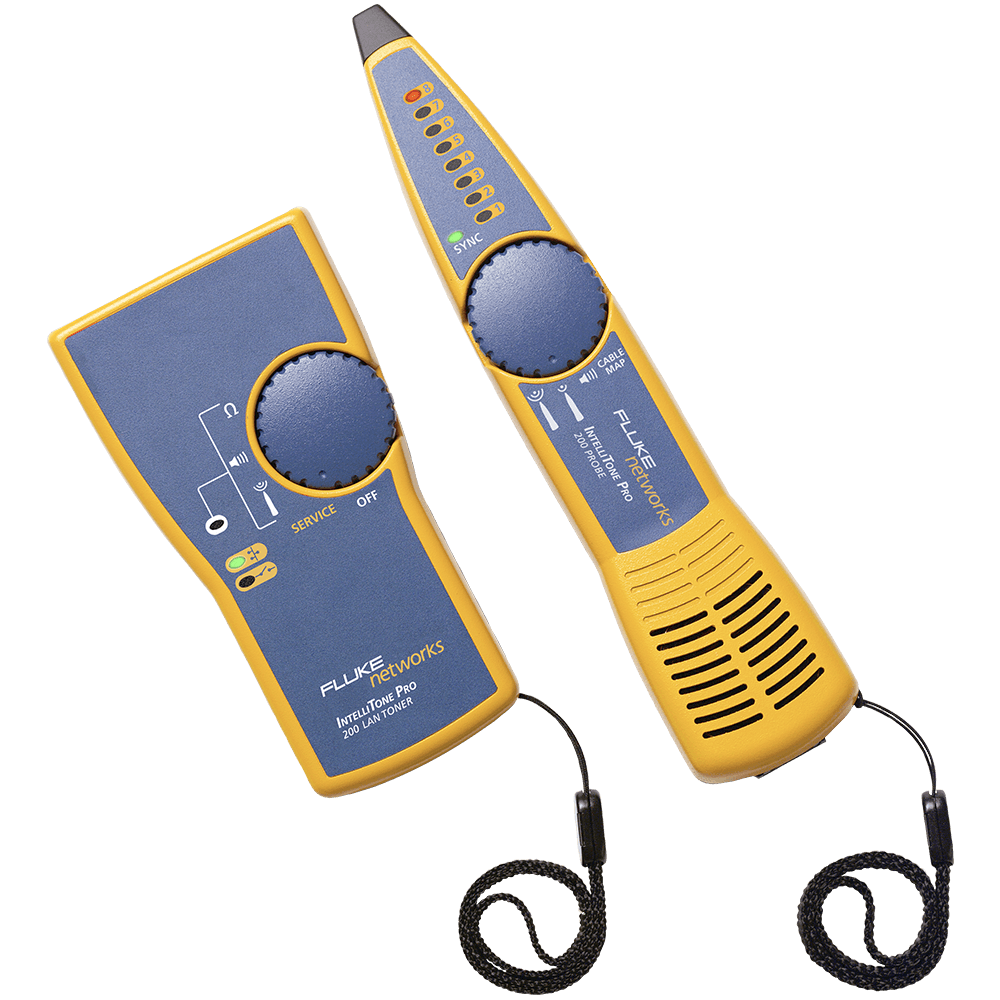