Driven by large hyperscale and cloud data center providers, advancements in signaling and transceiver technology have led to the development of next-generation transmission speeds. There are now multiple options available for 400G Ethernet applications over multimode and single-mode fiber with more on the horizon. And it doesn’t stop there—big players like Google, Facebook, and Microsoft are driving innovation to support 800 Gig and 1.6 Terabit applications, and the IEEE Beyond 400 Gig Ethernet Study Group is already defining objectives. 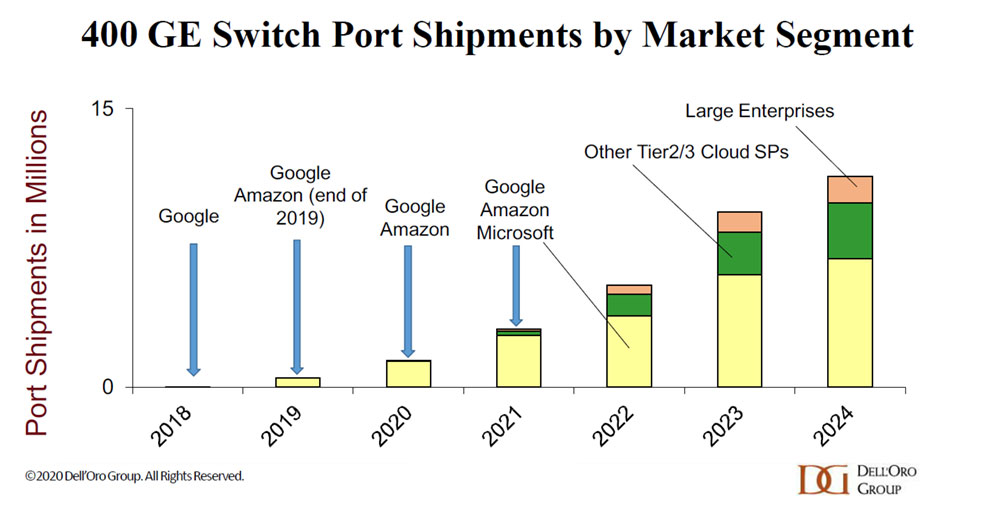 While most enterprise data centers aren’t yet deploying 400Gb Ethernet, the big players are already adopting these next-gen speeds in switch-to-switch links. These speeds are also making their way into long-haul service provider networks. But with 400 Gigabit being an ideal technology for 4X100 Gbps and 8X50 Gbps breakout applications in switch-to-server links, it won’t be long before we start to see adoption at the enterprise level. In fact, a 2020 forecast by Dell’Oro Group predicts that 400 Gig switch port shipments will ramp up for Tier 2 and 3 cloud service providers in 2022 with large enterprise data centers to follow suit in 2023 and 2024.

The good news is that existing fiber cabling and connectivity technology will support 400 Gigabit Ethernet and beyond, which means fiber testing equipment will also support these speeds. But there are some considerations. Let’s take a closer look.

With the development of four-level pulse amplitude modulation (PAM4) signaling technology that enables 50 and 100 Gigabit per second (Gb/s) per lane, as well as short-wave division multiplexing (SWDM) that enables transmission over multiple wavelengths on multimode fiber, there are now several viable options for parallel optic- (i.e., multi-fiber) and WDM-based applications for 400 Gig as shown in the table below.

It should be noted that like 100GBASE-SR4, the 400GBASE-SR16 application uses previous non-return-to-zero (NRZ) signaling technology at a 25 Gb/s lane rate. With the advent of PAM4, and the need for expensive 32-fiber MPO connectors that have limited market availability and a lack of transceiver support, most industry experts don’t see this application ever coming to fruition. In the case of the SWDM 400GBASE-SR4.2 application that transmits 50 Gb/s over two wavelengths on each fiber, parallel optic and SWDM-based technologies come together.

It’s also important to note that based on 100 Gb/s per lane PAM4 technology, the IEEE is also working to develop the 802.3db standard that will include 400GBASE-SR4, a 4-lane, 8-fiber multimode parallel optics application. That standard is expected to be released in mid-2022 and because it is supported with existing MPO-8/MPO-12 connectivity used in 40/100GBASE-SR4, and therefore offers an easier migration to 400 Gig, it will likely gain traction over the 400GBASE-SR8 application.

While larger cloud data centers that require longer link lengths and/or have the desire to leverage their existing duplex connectivity will deploy WDM-based 400GBASE-FR4 to reach up to 2 km, 400GBASE-SR4 and 400GBASE-DR4 appear to have the best chance of gaining traction in the data center environment since distances beyond 500 meters aren’t typically required. Furthermore, more complex WDM transceiver technology is more expensive than simpler parallel optic transceivers. Thankfully, 400GBASE-SR4 and DR4 8-fiber applications use the same multi-fiber push-on (MPO) connectors used in previous parallel optics applications like 40GBASE-SR and 100GBASE-SR. Testing of MPO-based systems is well established using test equipment like Fluke Networks’ MultiFiber™ Pro Optical Power Meter. With an MPO interface, MultiFiber Pro measures insertion loss and validates polarity on all 8 fibers, eliminating the need to use fan-out cords. But when it comes to 400 Gig, there are additional considerations.

Due to the higher signal-to-noise ratio in PAM4 signaling, there is a greater concern surrounding reflectance that can further degrade performance. While typically associated with single-mode fiber applications, APC (angled physical contact) multimode connectors are fast becoming the norm in 400 Gig multimode deployments to help limit reflections rather than the commonly used UPC (ultra-physical contact) fiber end face. The end face of an APC connectors feature an 8-degree angle that causes reflected light to be absorbed into the cladding. When testing APC connectors, you want to make sure that your tester can support them. With multimode, that may require using a UPC-to-APC hybrid test reference cord. You also want to make sure to use an APC probe tip when inspecting these connectors as a UPC probe can inhibit focusing on the core and end face. The Fluke Networks FiberInspector Ultra offers both UPC and APC inspection tips for MPO and single fiber inspection.

Speak with a specialist