Power over Ethernet (PoE) has gained tremendous momentum since the original IEEE 802.3af Type 1 PoE standard that delivered up to 15.4 Watts (W) was first introduced in 2003. With the latest 802.3bt standards able to deliver up to 90 W for powering everything from phones, cameras, and wireless access points (WAPs), to LED lights, point-of-sale machines, laptops, and digital displays, it’s no wonder that the number of PoE devices are on the rise. 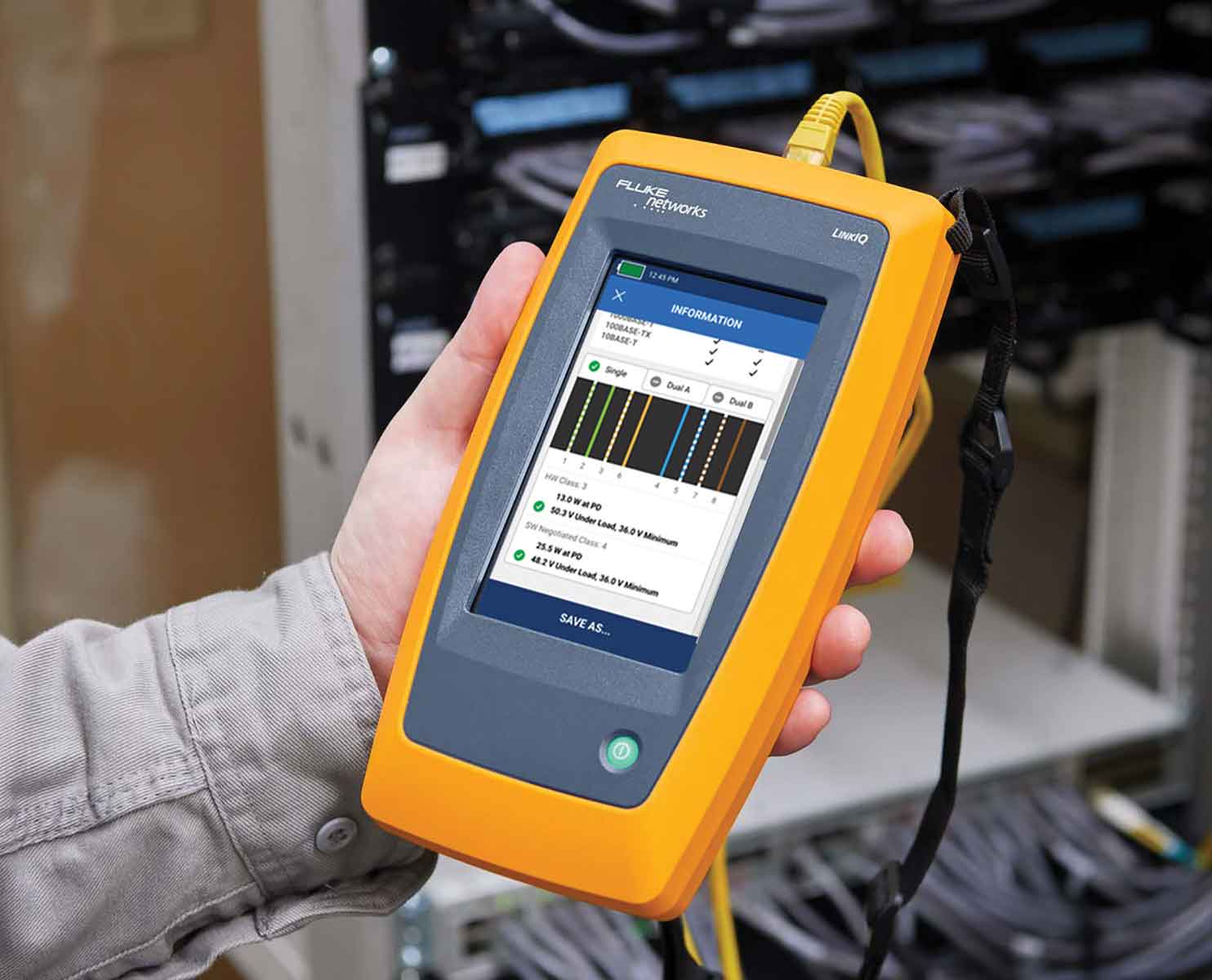 The Fluke Networks LinkIQ Cable+ Network Tester can tell you if you can support PoE devices.

By now, you’re likely being tasked with installing, testing, and troubleshooting cable plants that connect and power a wide range of PoE devices. While your certification tester will help ensure that the initial cable plant complies with industry standards, the growing number of PoE devices now warrants investing in a PoE tester. But what specific features and capabilities make the best PoE tester?

When cable plants are first installed by commercial datacom installers, they typically undergo certification testing to achieve a Pass or Fail in accordance with TIA or ISO cabling standards and to acquire the cabling manufacturer’s warranty. But as a network technician, you know that moves, adds, and changes frequently occur well after initial certification testing—new links and devices get added, outlets get relocated, and active equipment gets upgraded. Sometimes that means you need to determine if an existing link can support a specific network technology—especially since there are common cabling problems that can crop up during moves, adds, and changes.

Rarely, if ever, is a PoE device just receiving power and not transmitting and/or receiving data. Even simple PoE clocks are synchronized by receiving network time data. Ideally, the best PoE tester is therefore one that tests common transmission parameters like length, insertion loss, return loss, near-end crosstalk, delay skew, and wire map to qualify the cable to a specific IEEE application standard such as 1000BASE-T, 2.5/5GBASE-T, and 10GBASE-T. Besides, if a link doesn’t pass a wire map test, there’s no continuity for a device to receive data or power anyway.

Speaking of wire map testing, you want to look for a PoE cable tester that doesn’t just verify connectivity but rather one that can determine if the problem is an open, short, split pair, or miswiring so you can easily identify and fix the problem—especially since a simple DC continuity test will pass a split pair. In a split pair, pin-to-pin continuity is maintained but the physical pairs are separated. In shielded cabling systems, this is often due to a break in the continuity of the shield so choosing a PoE tester with the ability to test for shield integrity is also a consideration. Opens occur when a conductor within the cable is not fully connected at the termination point or has been broken somewhere along the link. Shorts occur when the signal crosses from one conductor onto another, likely indicating improper termination or a damaged connector or cable. A short could also indicate conductive material stuck between pins at a connection point. Miswirings such as reversed or crossed pairs are caused when conductors are connected to the wrong pins at the termination point.

As a network technician, the best PoE tester is also one that is intuitive and makes it easy to identify the problem. For example, a PoE cable tester that actually provides a graphical representation of all eight conductors and the shield (if applicable) and indicates precisely where the problem resides takes all the guesswork out of troubleshooting. As shown in the graphic, Fluke Networks’ LinkIQ™ Cable + Network Tester clearly indicates split pairs, wire map, and shield integrity issues with a red box around the failed wire numbers or shield.

Use a PoE cable tester to determine if the problem is an open, short, split pair, or miswiring. 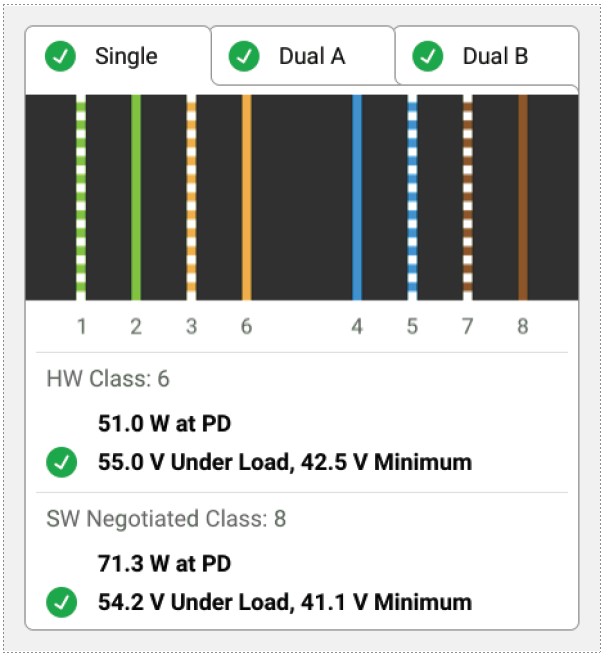 It’s also ideal to choose a PoE tester with the ability to test and troubleshoot live PoE networks as that is the only way to truly know if the power sourcing equipment (PSE) is supporting the requirements of powered device (PD). There are essentially two features that you want to look for in a live PoE tester—negotiated power class testing and PoE load testing.

IEEE assigns classes to PoE systems that range from 0 to 8. Type 1 and Type 2 PoE encompass Class 0 through Class 4 (4 – 40 W), Type 3 includes Class 5 (45 W) and Class 6 (60 W), and Type 4 includes Class 7 (75 W) and Class 8 (90 W). For PoE to function, the class of the PSE must be equal to or higher than the class of the PD. The best PoE tester will therefore indicate the negotiated class based on the wattage at the PD. LinkIQ™ shows the negotiated class and wattage at the PD for both the hardware and software levels. You can learn more about PoE classes in our guide to successful installation of PoE.

On a PoE-enabled switch, the amount of PoE power is allocated per port based on the requirements of its connected device. The best PoE tester is one that is essentially a PoE voltage tester that measures voltage per port while receiving the advertised power, otherwise known as PoE load testing. Using link layer discovery protocol (LLDP) or Cisco discovery protocol (CPD) that allows switches to discover devices and advertise their capabilities, Fluke Networks’ LinkIQ places a load on the connection to determine if the advertised power is actually being delivered to the device. It also shows the minimum required voltage that the device needs to meet—the link fails PoE testing if the voltage under load is less than the required minimum.

So if you’re dealing with a lot of PoE-capable links and you’re ready to add the best PoE tester to your arsenal of tools, choose one that’s going to both qualify your cable plant and test live PoE networks—and one that makes it intuitive and easy to do so. That’s Fluke Networks’ LinkIQ.