How High-Speed Fiber Applications are Impacting the Networking Arena

In last week’s blog, we took a Closer Look at 40 Gig Duplex Multimode Applications, just one of the many ways that today’s data centers are cost-effectively achieving increased bandwidth in switch-to-switch fiber links. And when we say many ways, we literally mean many. 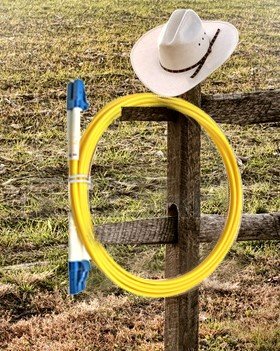 If you take a look at network application standards for balanced twisted-pair cable, there’s not that many to be concerned with. Sure, we had a methodical shift from 10BASE-T, to 100BASE-T, to 1000BASE-T, to 10GBASE-T that then jumped back to 2.5GBASE-T and 5GBASE-T to accommodate new technologies over the installed base and then forward again to the upcoming 25GBASE-T and 40GBASE-T standards, but all of this is nothing compared to fiber. And unlike fiber, there are few, if any, non-standard ways of deploying copper cabling.

But when it comes to fiber, there’s much that resembles the Wild Wild West. While not necessarily characterized by the rowdy, unrestrained and disorderly behavior associated with that era, there is certainly an untamed territory when it comes to fiber deployments—many of which can be noted for lawlessness (or at least noncompliance).

For Ethernet application standards over fiber, it’s like a wide-open range where you can stake your claim to achieve speeds from 1 to 100 Gig over a variety of multimode or singlemode options.

While 100 Mb/s over fiber had just one standard—100BASE-FX—that ran over what is now considered legacy 62.5µm multimode fiber, 1 Gb/s fiber applications suddenly gave us six different options over 62.5µm or 50µm multimode or singlemode fiber at a variety of wavelengths and distances.  And when we moved to 10 Gb/s, we suddenly had 10 different standards to choose from.

With the pending 50GBASE-SR standard – anticipated to release in 2018 – followed by 100GBASE-SR2 and short-reach singlemode fiber applications in development like 100, 200 and 400GBASE-DR4, this trend of multiple choices looks like it will continue. And if applications for OM5 WBMMF with WDM technology come to fruition, it won’t be long before there are six ways from Sunday to achieve 100 Gb/s.

Over the past decade, large hyperscale and supercomputing data centers have needed to achieve higher bandwidth speeds faster than IEEE could develop standards. That has led to a corral full of nonstandard-based options, with many of the technologies driven by new industry consortiums and alliances that have been working on next generation speeds outside of the existing IEEE 802.3 Ethernet working group.

As mentioned in our previous blog, we already have several non-standard bidirectional or unidirectional 40 Gb/s duplex multimode applications using WDM technology. Currently there are about a dozen non-standard ways to achieve 100 Gb/s. In fact, according to LightCounting market reach, more than 60% of 40 Gb/ shipments and more than 35% of 100 Gb/s shipments are non-standards based technologies.

Some of the technologies for high-speed fiber applications include variations of WDM and new interfaces and form factors, such as the QSFP double-density (QSFP-DD) form factor being developed to support 200 Gb/s and 400 Gb/s over eight parallel lanes. Also in development are interchangeable and interoperable optical modules that can be mounted onto printed circuit boards. These on-board optics being developed by the Consortium for On-Board Optics move optical components from current pluggable modules directly onto line cards, which drastically increases system density.

With hyperscale and supercomputing data centers deploying fiber technologies to meet their own need for next generation speeds, it’s easy to see why fiber is a lot like the Wild Wild West. And while some might consider them lawless outlaws, these pioneers are certainly helping to advance technology that will someday benefit the rest of us.