There’s been a lot of talk in the industry surrounding solutions capable of running 40 Gig Ethernet over duplex multimode fiber—especially with OM5 wideband multimode fiber (WBMMF) now recognized within industry standards that specifies wavelengths between 840 and 953 nanometers to support wave division multiplexing (WDM). 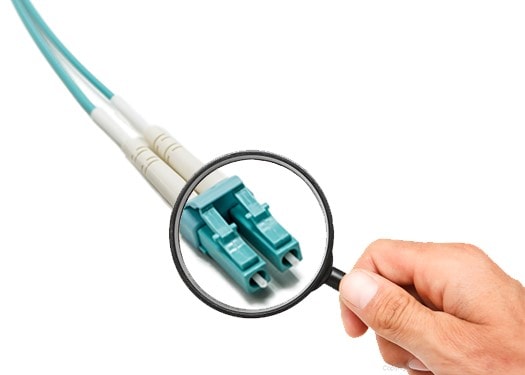 While OM5 fiber offers the potential to deliver 10 or 25 Gb/s over 4 different wavelengths for duplex 40 and 100 Gig applications, there are currently no IEEE applications under development that operate over OM5—and it does carry a premium over OM3 and OM4 fiber. There are, however, some non-standards based options for 40 Gig duplex applications that have been available for quite some time. Let’s take a closer look.

In contrast, bidirectional 40 Gig duplex applications transmit and receive over the same fiber. For example, the popular Cisco BiDi application uses two 20 Gig channels on two different wavelengths over each fiber where one wavelength is used for transmitting and the other for receiving.

While these two different methods of running 40 Gig over a duplex multimode are not interoperable and therefore can’t be mixed within the same channel, both offer the benefit of cost-effectively and quickly migrating from 10 Gig over duplex multimode application to 40 Gig without upgrading the cabling plant to multi-fiber MPO solutions used to support standards-based 40 and 100 Gig applications.

40 Gig duplex applications use standards-based cabling and connectivity, such as OM3/OM4 multimode fiber and LC duplex connectors. However, it’s important to be aware that these applications are not standards-based and the transceiver technology is considered proprietary. The IEEE 40 Gig standard for multimode is 40GBASE-SR4, which uses 8 fibers with 4 transmitting and 4 receiving at 10 Gig and requires MPO connectors.

It’s also important to understand the specific requirements and performance parameters specified by the vendor. For example, while OM4 supports 10 Gig duplex applications to 400 meters with a maximum channel insertion loss of 2.9dB, 40 Gig BiDi applications only have a reach of 125 to 150 meters (depending on fiber type) with an insertion loss of around 1.0dB.

Why the concern? If you had an existing OM4 10 Gig channel with multiple connections and longer distances, it may not necessarily support BiDi. That’s where insertion loss testing with Fluke Networks’ CertiFiber® Pro is a necessity for determining capability of the existing cabling plant. Furthermore, OM3 and OM4 fiber is designed for optimal operation at the 850nm wavelength, but non-standard 40 Gig duplex applications utilize additional wavelengths. To verify support for these applications, OM3 and OM4 fiber should be tested at both the 850 and 1300nm wavelengths.

While 40 Gig duplex applications might be an ideal cost-effective way to temporarily support these speeds over two fibers, IEEE recently released their 802.3by 25GBASE-SR standard for running 25 Gig over duplex OM3 and OM4 fiber. There is also the pending 50GBASE-SR application expected to be released in 2018 that offers higher speeds over duplex OM3/OM4 fiber than the current non-standards based 40 Gig duplex options.

There are also several other fiber standards in development, and with fiber applications often like the wild, wild west where anything goes, many in the data center world are achieving 40 Gig via other means—be it twinax, 4X10 Gig aggregation or singlemode fiber.