As the leading provider of instructor-led training for fiber optic technicians, Light Brigade was an obvious choice to give us feedback during the development of the FiberLert™ Live Fiber Detector. Recently, Sean Kelly, RCDD, CFHP, and Technical Director at Light Brigade, wrote down his thoughts about the tool now that it’s on the market.

Over the past 25 years of my career in fiber optics, I have seen a great deal of new and innovative products that aim to increase quality and ease manufacturing and installation. Those innovations ranged from cheap little jigs to six-figure pieces of equipment. There have been a few that I and others have wished for in the fiber world, such as the mythical fiber stretcher, a self-cleaning connector, and PoE over fiber. While our chances of seeing any of those are probably slim to none, there was one thing on the wish list that has recently become a reality: the FiberLert™ Live Fiber Detector from Fluke Networks. 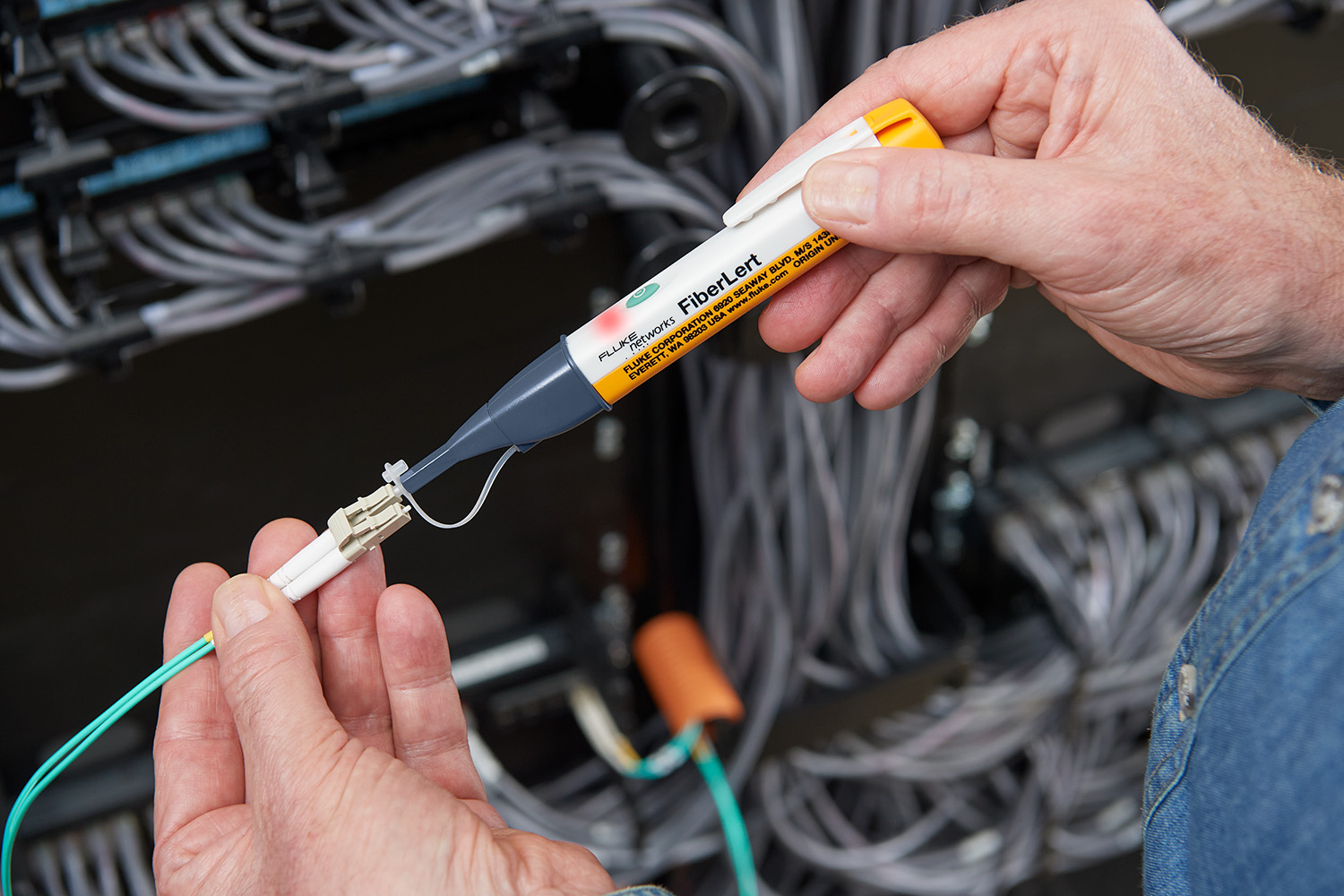 FiberLert is essentially a voltage detector-like tool from the electrical world that has been reinvented to work in the fiber world.

For many years I have said that it would be nice to have a tool you could wave in front of a transceiver, a pair of connectors, or even a bend in a cable to simply check if it was live. You may say that you can do the same thing with a power meter, a fiber identifier, or even one of those mood-ring-on-a-card things from the early 2000s (if you know, you know), but each of those tools took time to get out and set up, and in reality, they told you only part of what you wanted to know.

The real issue with those tools has to do with duplex connectors — specifically, small form factor connectors such as the LC and soon-to-be-popular USFF/VSFF connector solutions such as the CS and SN from SENKO and the MDC from US Conec. While those tools made it possible to detect the presence of traffic, it was difficult to distinguish which fiber or duplexed port or connector was live.

Imagine my excitement that day in late January 2021 when Adrian Young, Product Manager at Fluke Networks, reached out to see if I could be a sounding board for a new product idea that he had. He even had a “somewhat working prototype via web cam” to show me. That idea and prototype was a fiber optic tester (much like the ever-popular Fluke LVD2 Volt Light and 1AC-II VoltAlert for the copper world) that was hypersensitive to the presence of a live optical signal without physical contact. While a tool like this had been on my wish list for decades, I never thought that I would actually see one. When Adrian asked if I thought that there could be a market for something like that, I may have broken his eardrum with my very enthusiastic YES!

Fast forward six months or so, and that concept became a working product. It took a couple more months for me to get one in my hands to try, and a few more months to iron out some logistics, but I was finally able to get a FiberLert into every one of our “Fiber Optics 1-2-3” hands-on course kits. Each student in that class gains exposure to what is arguably the most useful and easiest-to-use fiber optic indication and troubleshooting tool available.

Detect a live optical signal without physical contact with the Fluke Networks FiberLert.

The FiberLert fiber optic testing tool should become a staple in every technician’s tool bag. It is not only useful as a troubleshooting and polarity tool, but as a safety tool to verify disconnection prior to inspection with a direct-view inspection scope. It is easy to use with minimal training and is useful in so many ways. Its footprint is also very familiar to former copperheads and electricians that have transitioned into the fiber world.

This is one of the most innovative tools that I have seen in my career, and yet it is relatively inexpensive when compared to other testing and troubleshooting tools.

Phil Shoemaker, senior instructor and staff development lead at Light Brigade, adds: “I love being able to show this tool to students in class. It is a simple-to-use, innovative tool that makes detecting the presence of a signal easy and accurate. It can show which port on a duplex transceiver is live, if the transceiver itself is active, if signal is exiting the far end of a link or patch cord, and whether it is channel A or B. This is not only valuable for fiber network troubleshooting or checking polarity, but also as an increased safety measure. We always stress that you should never inspect a live fiber path. Before FiberLert, it was somewhere between a guessing game and a time-consuming, multi-step process. But with FiberLert, it is easy and fast to verify the status of an optical path.”