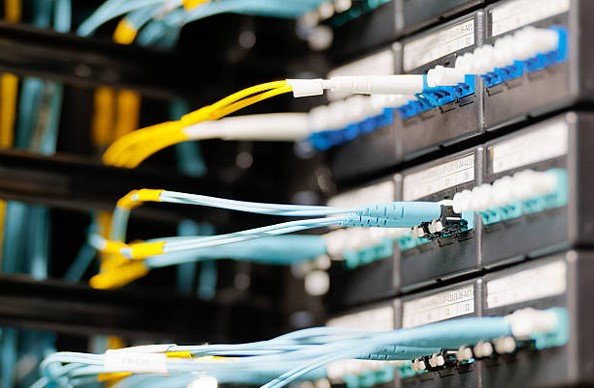 Singlemode fiber is however growing in popularity in shorter-reach applications due to its inherently higher bandwidth capabilities, and more technicians are faced with installing both singlemode and multimode fiber plants. It occurred to us that not everyone understands the technical differences between the two fiber types. Let’s take a closer look.

What’s in a Mode?

Think of it this way. When you go down a water slide, you bounce off the walls of the slide. Each angle that you travel is a mode. Light within a multimode glass core works the same way. The light hits the glass at an angle and reflects back again, moving the light along the length of the core. Why doesn’t the light just shine out of the core? First of all, the light hits the glass at a shallow angle, which causes the glass to act like a mirror. Secondly, there is a layer around the core called the cladding. To keep the light inside the core, the cladding has a different refractive index profile, which is the technical parameter that determines how much light is bent, or refracted, when entering a material.

In contrast, light traveling through a singlemode fiber moves in one, straight mode without bouncing off the edges due to the smaller size of the core, which is about one tenth the size of the multimode fiber core.

Why does singlemode fiber support significantly greater bandwidth and distances? Sending light in a single mode eliminates something called differential mode delay (DMD), which is the primary bandwidth-limiting factor of multimode fiber.

The smaller the DMD, the less the light pulses spread out over time and the higher the bandwidth. When the time difference between pulses is greater, the receiver may not be able to properly distinguish the pulses. DMD is directly related to distance—it increases as the fiber length increases. This is why multimode fiber has much shorter distance requirements than singlemode—up to about 500 meters for multimode compared to 10 kilometers for singlemode.

DMD can also be caused by imperfections in the fiber, and fiber manufacturers have learned to limit DMD by carefully optimizing the fiber refractive index profile. Rather than the modes refracting only where the core meets the cladding, multimode fiber uses a graded fiber index profile that changes continuously from the center of the core to the core-cladding boundary. This creates a parabolic (i.e. symmetrical curve) pathway that causes the lower order modes travelling the shorter distance close to the core of the fiber to travel slower, and the higher order modes travelling longer distances near the edge of the core to travel faster. This minimizes time delays between pulses, thereby decreasing DMD and allowing for higher bandwidth.

And when it comes to testing multimode vs. singlemode, it’s important to understand that the two fiber types cannot be mixed and launch cords must match the fiber type being tested. Testing multimode fiber also requires Encircled Flux (EF) testing, which characterizes how the light is launched into the cabling under test. EF testing restricts the number of modes launched to reduce variability and achieve precise, repeatable test results. Click here for more information on Encircled Flux testing.