We all know that Ethernet is the de facto physical layer communication protocol for data transmission between devices in a local area or wide area network. It has evolved over the years to deliver higher levels of performance while maintaining backwards compatibility, reliability and relatively low cost, which is why it has maintained its popularity.

Lately you may have also heard Ethernet used in the context of “commercial Ethernet” and “industrial Ethernet.” While both are still considered Ethernet, utilizing frames for sending information to and from devices via MAC addresses, they aren’t exactly the same—from how they send and receive information and topologies deployed, to the components and testing considerations.

Let’s look at the main differences between the two. 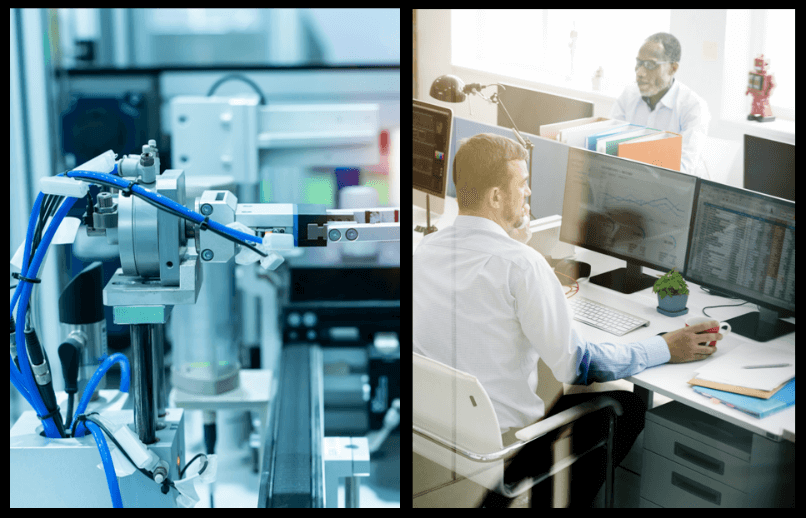 With Time and Determinism

Standard commercial Ethernet is inherently not real-time enabled because it uses Carrier Sense, Multiple Access with Collision Detection (CSMA/CD). This is what allows for detection of the network and destination address (CSMA) and the ability for a device to recognize that it has attempted to transmit information at the same time as another device (CD). When a collision is detected, transmission ceases and is transmitted again when it’s clear to send. In other words, the time it takes for any given packet to arrive at its destination cannot be determined, meaning it's not deterministic.

While Collision Detection is great for effectively transmitting enterprise information, it does cause a slight delay that can be high as hundreds of milliseconds. This is not something we really notice or care about in a commercial enterprise environment. But in an industrial environment, even the slightest delay is unacceptable since automation and control systems depend on information arriving exactly where and when it’s needed. That’s why communication at the device level in an industrial environment has long relied on protocols like Profibus and Modbus that offer time-sensitive transmission and determinism.

Thankfully, the IEEE 802.1 Time-Sensitive Networking (TSN) task group has been able to address this issue with new prioritization mechanisms and algorithms using time synchronization. This has resulted in a set of deterministic, real-time Ethernet standards for sending time-critical information at the data link layer, ideal for even the most challenging motion control applications. In a nutshell, TSN is what brings industrial-grade requirements to Ethernet.

While commercial Ethernet networks are almost always configured in a star topology, Industrial Ethernet often includes a combination of star, ring and bus topologies to fit a variety of applications. Bus topologies, referred to as multi-drop or multi-segment in industrial applications, are common where there is a need for multiple nodes to share a common link. That’s why new 10BASE-T1L single-pair Ethernet allows for up to 10 in-line connectors.

In addition, while the hierarchical star topology is ideal for commercial Ethernet, Industrial Ethernet requires even better redundancy and elimination of single points of failure. To this end, Industrial Ethernet has adapted hybrid star-ring topologies that minimize downtime for production cycles via zero failover. New protocols such as High-availability Seamless Redundancy (HSR) defined in IEC 62439-3 is designed to achieve zero recovery time in a ring by sending each packet in both directions at the same time so that the receiving node accepts the first packet to arrive and disregards the second.

As we highlighted in a previous blog, connectors used for Industrial Ethernet are also different in that they need to withstand harsher mechanical factors, the potential for ingress, extreme temperatures, chemicals and electromagnetic interference. Therefore, we often see M12 and M8 locking thread connectors used as they are far more durable and better designed to handle ongoing vibration compared to commercial Ethernet RJ-45 connectors. Cables too need to be able to stand up to harsher environments, which is why they feature jacket materials with higher tensile strength and chemical resistance, as well as higher strand counts for flexibility. Both connectors and cables need to meet more stringent M.I.C.E. parameters used for classifying components in an industrial network where M is mechanical (flex, vibration), I is Ingress (moisture), C is Climatic (temperature), E is Electromagnetic (noise). MICE standards apply to any industrial Ethernet protocol, including EtherNet/IP, ProfiNET, EtherCAT, Modbus-TCP and others.

More than half of Industrial Ethernet problems can be traced to cabling, and the harsher industrial environment can play a role and require a shift in what you need to look for when testing and troubleshooting. For example, Industrial Ethernet cables can experience continuity problems caused by flexing, vibration, corrosion and temperature changes. While continuity testing will find open connections, finding a poor connection requires measuring the resistance of each individual conductor. This can be done by testing for DC Resistance Unbalance with your Fluke Networks’ DSX CableAnalyzer™ series tester, which looks at the difference in resistance between each conductor of a pair. If too high, it could indicate a poor connection.

Electromagnet interference (EMI)—the “E” in M.I.C.E.—can also damage Industrial Ethernet packets. To determine if a cable is susceptible to EMI, the DSX CableAnalyzer tests for Transverse Conversion Loss (TCL) and Equal Level Transverse Conversion Transfer Loss (ELTCTL), which are covered in both TIA and ISO M.I.C.E. standards. When testing, limits to M.I.C.E. standards can be selected in your tester to match the ‘E’ level of the environments—E1 for commercial office environments, E3 for environments close to powerful EMI sources and E2 for cable runs between E1 and E3 zones.

Of course, when testing you also need to ensure that your tester has the right interface and test setup. In industrial deployments, it is common to see cables terminated with M12 type connectors in a point-to-point configuration without cross-connections or interconnects, which essentially makes them just a long patch cord. Since channel testing does not include the performance of the plugs at either ends, ISO/IEC added end-to-end (E2E) test limits to the 11801-3 standard, which can be performed using DSX M12D or M12X Adapters available with the DSX CableAnalyzer series testers. It is common to see some of these point-to-point links terminated to an M12 style connector on one end and an RJ45 style plug on the other. In this instance, you’ll need an M12 Adapter on one end and a Patch Cord Adapter on the other since that’s what is used to test the performance of the field-terminated RJ45 plug.