Getting Polarity Right the First (or Second) Time Around

While the fact that a fiber link’s transmit signal (Tx) must match the corresponding receiver (Rx) at the other end makes perfect sense, ensuring proper polarity to ensure that this correspondence is maintained continues to cause plenty of confusion – especially when it comes to multi-fiber MPO connectivity where 12 fibers located in Position 1 through 12 at one end must each arrive at their corresponding position at the other end.

Polarity needs to be determined during the design phase so that the right components can be purchased. Unfortunately, the confusion surrounding polarity often means finding out that you’ve ordered cables or patch cords with the wrong polarity. And since pre-terminated MPO assemblies and jumpers are typically made to order (and often nonreturnable), ordering the wrong polarity risks unexpected project delays and expense. Thankfully, the combination of being able to test for polarity and new MPO connectors that allow you to change polarity in the field is putting an end to the risk. Let’s take a closer look.

MPO connectors are either male (with pins) or female (without pins) to ensure alignment of the fiber end faces during mating. Since the MPO interfaces on active equipment are male (with pins), MPO patch cords should be female (without pins) to avoid damage to the transceiver. MPO connectors also include a key on the top side of the connector and a white dot on the side to indicate the location of Position 1. The orientation of the key is critical when it comes to polarity.

There are two main methods when it comes to polarity – Method A and Method B. Method A uses Type A straight-through MPO trunk cables with a key up connector on one end and a key down connector on the other end (Position 1 arrives at Position 1). A Type A MPO patch cord is used on one end to connect patch panel ports to their respective transceiver ports. On the other end, a Type B MPO patch cord that is key up to key up (Position 1 arrives at Position 12) is required to make sure that the Tx corresponds with the correct Rx.

There is also a Type C cable that flip the pairs so that so that the fiber in Position 1 arrivers at Position 2 at the opposite end and the fiber in Position 2 arrives at Position 1. Method C works well for duplex applications but is not recommended since it does not support 40 and 100 Gig applications unless using a complex Type C MPO cross-over patch cord at one end, which are not readily available. Click HERE to learn more about MPO cable types and polarity.

When polarity isn’t maintained and the transmit signal (Tx) at one end doesn’t match the corresponding receiver (Rx) at the other end, you simply won’t have a working channel. Thankfully Fluke Networks’ MultiFiber™ Pro allows you to test individual patch cords, permanent links and channels for correct polarity. So, if you made the mistake of ordering and installing Type B patch cords on both ends when your trunk cables are Type A, MultiFiber Pro will alert you to the problem.

But now instead of having to reorder and wait for patch cords with the right polarity (or keep both types in inventory), there are new MPO connectors on the market that allow you to change polarity in the field to easily correct your mistake, save money and avoid delays.

Panduit’s PanMPO is one such connector that allows you to change polarity in the field via an interchangeable housing that is easily removed, rotated 180 degrees and replaced to change the key position on the connector between key up and key down. 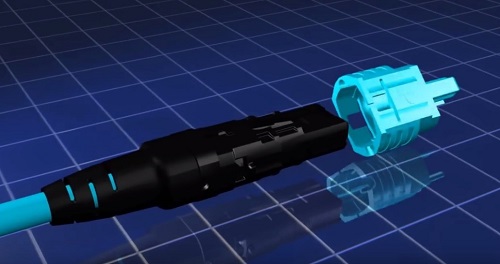 Another changeable MPO connector is the MTP® PRO from US Conec, which rather than removing the housing, uses a tool to change the key position between key up and key down—you simply insert the connector into the polarity change port on the tool until it clicks and then remove. MTP® PRO trunk cables and patch cords are offered by a handful of manufacturers, and some have even made it a standard offering for patch cords since that’s where the majority of polarity mistakes arise. Both the PanMPO and MTP® PRO also allow you to change gender by either removing or adding pins so you can always ensure female to male mating at active equipment and adapters. 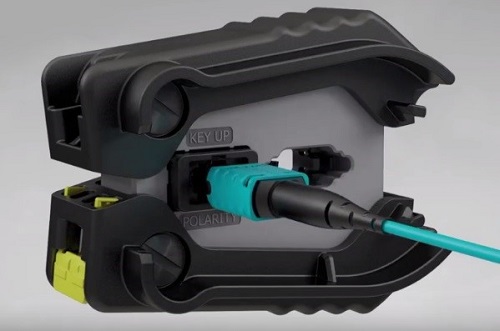 While having a MultiFiber Pro to let you know that incorrect polarity is why your fiber network isn’t working is essential (not to mention being able to automatically scan and test all 12 fibers for insertion loss results in just 6 seconds), combining that capability with changeable MPOs makes for the ultimate time and money-saving duo—allowing you to always have the right polarity for a functioning transmit-to-receive fiber cable plant.