At this time of year, every industry tends to reflect on the past twelve months and make predictions about what 2018 will bring – it’s just what we do. So why should this year be any different? 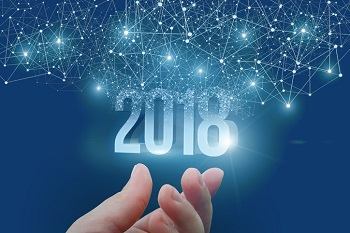 While no one can predict the future, 2018 puts us smack-dab in the middle of the Internet of Things revolution. Recent studies estimate about 20 billion connected devices globally as we move into 2018, and experts anticipate steady growth this coming year as more companies utilize IoT—especially in healthcare, retail and industrial industries. So it’s no surprise that the IoT can be considered the driving force behind what we might expect to see in our industry.

Installers Turning to the Cloud

While 2017 saw many companies pulling back from moving everything to the cloud as they realized the need for a hybrid approach with closer control over some applications and edge computing for more challenging environments, we will continue to see the use of cloud-based services where it most makes sense. One of those is cloud services for cabling infrastructure certification.

Given the growing number of connections driven by IoT and more complex requirements for testing and certification (combined with overall increased trust in cloud-based services), we anticipate that more installers than ever will turn towards cloud-based solutions like LinkWare Live to improve efficiency and productivity. Customers are connecting more devices, demanding consistency across multiple sites, and requiring testing to more application standards like broader wavelengths on fiber to support potential future wavelength division multiplexing in the backbone, or 2.5/5GBASE-T applications on copper in the horizontal.

These changes demand more custom cable IDs and more complicated tester set up. With the ability to define cables IDs and test settings and then upload them to the testers, as well as access and share testing information on tens-of-thousands of links from anywhere at any time, 2018 will likely see a significant increase to Linkware Live’s already nearly 9 million uploaded results.

Flourishing of PoE and Plug-Terminated Links

With the much-anticipated release of IEEE 802.3bt Type 3 and Type 4 PoE in 2018, we will start to see more devices forego their AC power connection for PoE—everything from LED lights and digital displays, to building automation devices and maybe even desktop computers. At the same time, changes in the 2017 National Electric Code that will be adopted in 2018 by multiple municipalities across the nation will continue to raise questions on the best way to support these higher levels of PoE from an installation and testing standpoint.

As a result, 2018 may see more requests for field testing of DC resistance unbalance within and between pairs to ensure support for higher power four-pair PoE, as well as a focus on proper cable bundling practices to resist heat rise and subsequent insertion loss in cables delivering PoE to a multitude of devices.

Since many of these devices can be connected to the network using plug-terminated links rather than traditional outlets and patch cords, and the upcoming TIA 568.2-D standard includes support for this configuration (including the new Modular Plug Terminated Link, or MPTL, testing procedure), 2018 will also likely mean more field-terminated plug options and support for plug-terminated links by both cabling and device manufacturers.

Although 25 and 40GBASE-T equipment is not expected to hit the market this year, and widespread adoption is still a few years out, 2018 will likely see the first shipments of Category 8 components and installations by early adopters – just like we saw with Category 6A. Thankfully, Category 8 testing capabilities are already available to support these installations, which further fuels early adoption.

The installation and testing of Category 8 will be limited primarily to new switch-to-server links in data centers for those that anticipate increased bandwidth requirements to support the ever-increasing amount of data, especially those planning to embark on the integration of IoT technologies. Since Category 8 is plug-compatible with current 10GBASE-T electronics, and it supports 10, 25 and 40GBASE-T autonegotiation, it will also be deployed by those early adopters who are looking to avoid expensive upgrades in the future.

To support Big Data, multifiber push-on technologies (MPO) will continue to grow with new configurations expected that promise higher densities and faster speeds. Which configurations will become the most widely adopted is yet to be seen, but these innovative MPO technologies will appear first in large hyperscale data centers.

At the same time, enterprise data centers will continue to ramp up 40 and 100 gig installations that require current MPO connector technologies. Consequently, 2018 will see greater focus on topics like polarity and testing considerations for MPO deployments.