Home > Community > Blog > What You Need to Know About Testing BIMMF

What You Need to Know About Testing BIMMF

A BIMMF design tightly confines the higher-order modes that are more likely to escape the fiber core during bending. The design achieves this by adding a specially engineered optical “trench” between the fiber core and cladding.

While BIMMF allows cabling installers to deploy a network with less worry about inducing bend loss due to workmanship, there are some considerations when it comes to testing. Let’s take a closer look.

All BIMMF designs exhibit a length dependency if an overfilled launched is used. Higher-order modes that get launched into the trench can remain there for some distance until they attenuate. These modes that propagate within 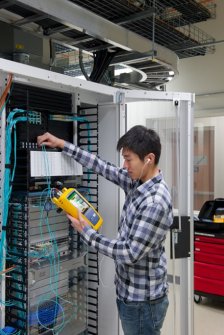 the trench are referred to as “leaky modes” and can affect splice and connector loss.

While accurate testing of standard non-BIMMF fiber can be achieved with a dual wavelength source and a common test cord and mandrel, a standard 25 mm mandrel does not do a good enough job of stripping out the higher modes as the 850 nm wavelength, resulting in pessimistic losses.

While more turns around a smaller, uniquely shaped 4 mm mandrel has been shown to strip out higher order modes at 850 nm, the same mandrel cannot be used at the 1300 nm wavelength. Different loss readings between the two wavelengths will be measured. Furthermore, requiring a very small and uniquely shaped mandrel design for each wavelength adds complexity and confusion to the testing process.

Instead of mandrel testing, a more tightly controlled launch condition such as encircled flux (EF) is therefore required when testing BIMMF—it mitigates the problem of an overfilled launch and leaky modes while enabling consistent and accurate measurements at both wavelengths.

Modeling and testing on BIMMF has shown that an optimized BIMMF is backward compatible and can be mixed with non-BIMMF without inducing excess loss. However, this also requires a more tightly controlled launch such as EF. There is also evidence that connector incompatibility and fiber geometry differences (core diameter) may cause direction dependence regardless of fiber type.

When testing multimode fiber links, attenuation measurements are greatly influenced by the launch condition of the light source. Because the use of a BIMMF launch cord with a common mandrel for both 850 nm and 1300 nm wavelengths causes significantly different results, only non-BIMMF fiber should be used in launch cords.

To complete a permanent link test using the recommended 1-cord reference method, a receive cord must be used to provide link attenuation measures that include the installed fiber and the two connections at each end of the link. While a well-designed BIMMF test cord that matches the installed cabling core diameter and numerical aperture will work, it is prudent to also use a non-BIMMF as the receive cord to avoid the possibility of an overly optimistic test result. This is an area that is still being studied.

So What Do You Need to Do?

Testing BIMMF is really no different than testing other fiber types – it requires an encircled flux launch and non-BIMMF launch cord attached to the light source, the recommended 1-cord reference method, and a non-BIMMF receive cord when measuring a permanent link. The good news is that with Fluke Networks’ EF-compliant CertiFiber® Pro, there is no extra work at all.

To take a closer look at test methods for BIMMF and view the complete steps for measuring and validating the attenuation of test cords and permanent links, download the Fluke Networks’ white paper, The Ins and Outs of Testing Bend Insensitive Multimode Fiber (BIMMF): The Need for Encircled Flux.