Home > Community > Blog > Versiv Gets an Upgrade to Version 5.6

Versiv Gets an Upgrade to Version 5.6

Keep your Versiv tester on the cutting edge of technology with the newly released Version 5.6 now available for download. The new version makes it a lot easier to do something that Versiv already does – testing cables for their ability to work with Power Over Ethernet. This is just in time as the new IEEE 802.3bt standard is nearing approval. This new version of PoE defines four pair implementations that can provide up to 90W of power at the switch port (71 W at the powered device). This opens the door to a wide range of new PoE applications, including lighting, laptops, more sophisticated cameras, and large screen monitors.

The developers of cabling and Ethernet standards have therefore developed limits for resistance pair-to-pair unbalance and resistance unbalance within a pair to ensure that data and power can coexist on the cable.  However, field testing standards such as TIA-1152-A describe testing resistance as optional for installed systems, and since workmanship and cable quality can affect these parameters, you won’t know if a cable is capable of support PoE unless you include the resistance measurements when testing in the field.  That’s why the DSX Series CableAnalyzer Series offers all three types of resistance tests: pair resistance, pair-to-pair balance and balance within each pair.  However, the basic Category cable tests in the DSX won’t PASS or FAIL a cable based on its resistance performance.

That’s why we’ve added a new set of “+PoE” tests in the 5.6 release.  Just check the “+PoE” indicator when selecting your test, then choose the correct Category limit including “(+PoE)” and the tester will add the resistance measurements and compare them against the limits standards requirements.  The good news is that these tests add less than two seconds to the DSX-8000’s fast seven-second (Category 6A) test times.  Since installers don’t always know which cables will be used for PoE and which won’t, the simplest and safest approach is to just test all newly installed links with “+PoE” enabled.

This new release includes a number of additional features and bug fixes, including:

There are two ways to get the new software into your Versiv. First, the traditional way, where you download the code from /support/downloads, fire up LinkWare™ PC, connect a USB cable to your tester and start the process. Second is the fast and simple way that’s available to LinkWare Live users. The next time you SYNC your tester, it will ask if you want to update to the new code over your network connection. Confirm you’re ready to upgrade and your Versiv will take it from there. In either case, make sure you have a USB cable handy so you can update the remote unit once the main unit is finished.

You can find the release notes, instructions, and the actual software at
/support/downloads 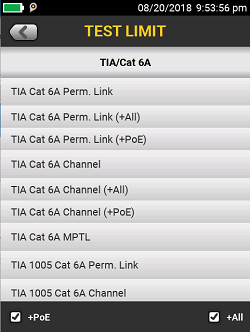 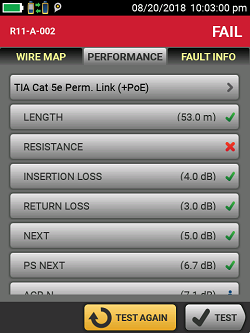 Example of a cable that passes all standard requirements but fails resistance, indicating potential problems with PoE applications.