Home > Community > Blog > Cable Testing 101: What is the Difference Between OM3 and OM4?

Cable Testing 101: What is the Difference Between OM3 and OM4?

OM3 and OM4 multimode fiber are two common types of fiber used in local area networks--typically in backbone cabling between telecommunications rooms and in the data center between main networking and storage area network (SAN) switches.

Both of these fiber types are considered laser-optimized 50/125 multimode fiber, meaning they both have a 50 micron (µm) diameter core and a 125 µm diameter cladding, which is a special coating that prevents light from escaping the core. Both fiber types use the same connectors, the same termination and the same transceivers--vertical-cavity surface emitting lasers (VCSELs) that emit infrared light at 850 nanometers (nm). 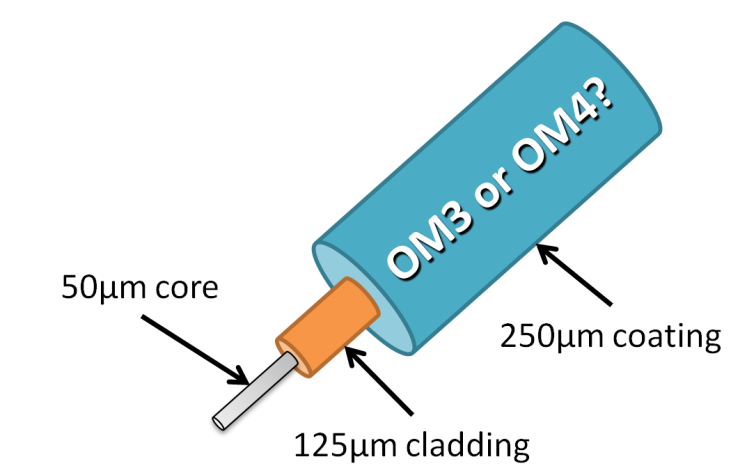 With so many similarities, and often manufactured with the same color aqua cable jacket and connectors, it can be difficult to tell these two fiber types apart. But there are some differences to be aware of. As part of our Cable Testing 101, let's take a closer look.

It's all in the Core Competency

The main difference between OM3 and OM4 multimode fiber is in the internal construction of the cable's fiber core. For a fiber link to work, the light from the VCSEL transceiver much have enough power to reach the receiver at the other end. There are two performance values that can prevent this-- optical attenuation and modal dispersion.

Measured in decibels (dB), attenuation refers to how much the power of the light signal is reduced as it transmits from point A to B, and it is caused by connectors, splices and the overall length of the cable. Modal dispersion refers to how much the modes of a light signal spreads out as they travel down the fiber. If the various modes of light spread out too much, the receiver at the other end will have trouble decoding the signal.

The real difference between OM3 and OM4 multimode cable is that OM4 provides a higher modal bandwidth--4700 MHz·km compared to 2000 MHz·km for OM3. This means that OM4 can transmit more information within the same distance.