Since the development of 40GBASE-T (IEEE 802.3bq) began a few years ago, most of us believed that the next Ethernet data center speed for twisted-pair copper cabling beyond 10 Gb/s would be 40 Gb/s. 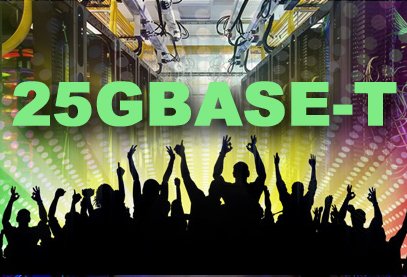 But in November 2014, IEEE 802.3 put out a call for interest on 25GBASE-T, driven by the likes of Cisco, Microsoft and Intel who recognized 25 Gb/s as a more efficient, cost-effective option for switch-to-server speeds in cloud-based data centers. Hence the 25GBASE-T IEEE study group was formed.

Within just four months following the formation of the study group, the objectives for 25GBASE-T were determined and approved, and the development of the 40GBASE-T standard was expanded to include this new application. In other words, 25GBASE-T has officially joined the party!

Not Exactly a Newcomer

If it seems as though the objectives for 25GBASE-T were established very quickly, that’s because they build upon much of the work that was already completed by IEEE in the development of 40GBASE-T.

For example, both applications are slated to use the same Category 8 shielded cabling in a two-connector, 30 meter channel. Objectives also include support for full duplex operation only, a bit error rate better than or equal to 10-12, autonegotiation, Energy Efficient Ethernet and point-to-point links over structured cabling topologies, including directly connected link segments.

In other words, while 25GBASE-T is joining the party, its objectives mirror that of 40GBASE-T and don’t exactly include any newfangled complexities.

With representatives from 25 companies overwhelmingly pledging support for the formation of the 25GBASE-T study group, the likes of Microsoft, Cisco and Intel driving the party bus, and a demonstrated broad market potential, 25GBASE-T is definitely a welcomed partygoer.

Why is 25GBASE-T considered a more cost-effective step in the migration to 40GBASE-T? Not only does it support the backwards compatibility of BASE-T technology and enable equipment vendors to limit the power per port to under 3W, it can also leverage existing transceiver technology to establish a fixed migration path to 40GBASE-T over the same 30-meter channel.

Furthermore, 25GBASE-T offers something more than 25 Gb/s direct attach copper (DAC) cables using the SFP+ form factor—distance. Limited to about 5 to 7 meters, passive 25 Gb/s DAC cables are primarily targeted to top-of-rack (ToR) topologies where switches connect directly to servers in the same cabinet. At 30 meters, 25GBASE-T will support a broader range of topologies, including end-of-row (EoR) and middle-of-row (MoR) topologies that many large cloud-based data centers see as an advantage over managing switches in hundreds of racks.

And then there is the familiarity factor. It’s always easier to welcome a guest that everyone is comfortable with. While category 8 twisted-pair cabling that will be used for both 25GBASE-T and 40GBASE-T will be a fully shielded solution, it is expected to use the popular RJ45 style connector that has been in place for multiple BASE-T generations.

The Party is in Full Swing

While 25GBASE-T just joined the 40BASE-T party, development of PHYs to support both applications have been in full swing for a while. It is expected that 25GBASE-T equipment will be available as early as this year, with the standard planned for ratification in 2016.

And with cabling, equipment and standards in place comes the need for testing. Since 25GBASE-T will use the upcoming category 8 cabling that is well into its development, the testing parameters are already fairly well known. While the testing standards for test accuracies and reporting requirements have yet to be defined, you can rest assured that Fluke Networks is hard at work on the accuracy requirements and test equipment to support this latest addition to the party.