At these levels of DC power, no one ever really questioned the safety of PoE. But once four-pair Type 3 and type 4 PoE were introduced in 2018 at 60 W and 90 W respectively, and the National Electric Code was revised to address 60 W remote-powering circuits, many started to wonder if PoE is safe. We thought we’d take a closer look. 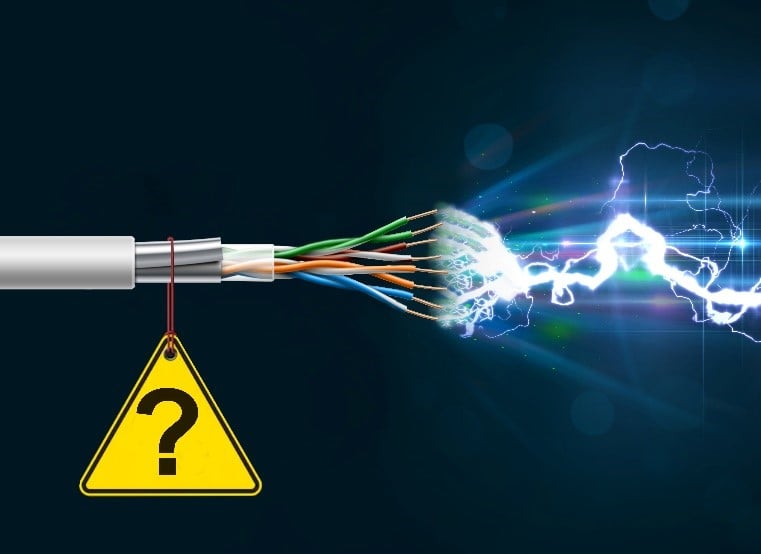 While blasting AC/DC’s “Back in Black” above 70 decibels is definitely NOT safe for your ears, there has long been the belief that DC power is safe while AC power is not. There’s some truth behind that as AC power is considered to be about 3 to 5 times more dangerous than DC—it takes far more milliamps of DC current than AC current at the same voltage to kill you. To better understand why, it helps to understand the difference between the two. 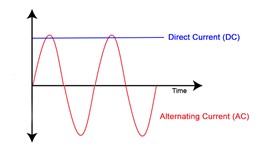 AC power alternates back and forth periodically while DC power flows in one direction. That’s why AC power has a frequency and DC power does not. In the U.S., AC power alternates 60 times per second (60 Hz). In Europe, it’s 50 times per second (50 Hz). An easy way to visualize the difference is to view them graphed—AC power makes a wave-like (sinusoid) pattern while DC is just a flat line.

When you are shocked by dangerous amperage levels of AC power, the alternating nature of AC power causes the heart to go into atrial fibrillation. The continuous flow of DC power is not as dangerous for the heart, but it can cause convulsive contraction and can even kill you at high enough levels. In addition to the level of current, the resistance of the body is also an important factor, which can be impacted by humidity, thickness of skin, weight, age and even sex. Dry skin has a greater resistance than wet skin and the amount of electrical current that flows through the body goes up when resistance goes down. And women are more susceptible to currents than men due to less overall body resistance.

In addition, the path makes a big difference. Electric shock only happens if there is a complete path with two contact points on the body for the current to enter and exit, and electricity will always take the easiest path to ground. The path the current takes has a lot to do with how harmful the shock is – a current that flows from hand to hand and therefore through your heart is far more dangerous than one that flows from, say, your finger to your elbow.

What Does that Mean for PoE?

Per IEEE standards, PoE is injected into a cable at voltage between 44 and 57V DC, typically 48V DC. Typically, anything less than 35V AC or 60V DC is considered safety extra low voltage (SELV), so by definition, PoE-enabled ports are SELV. That’s not to say that 48V DC can’t shock you (you’d know this if you ever touched your tongue to a 9-volt battery when you were a kid). And no one is recommending that you strip the insulation off of a twisted-pair cable conductor and poke it with your bare hands (especially while soaking wet).

But with PoE, you still have little chance of getting shocked from a disconnected cable due to the actual protocol itself. That’s because the power sourcing equipment (PSE) must experience a handshake with the powered device (PD) before any power is delivered. No handshake, no power. That’s quite different than an standard AC power receptable that is constantly supplying power, regardless of whether you’ve got a device plugged in.

In a nutshell, the answer is YES. PoE is safe.

There’s Always a But

So, if PoE is safe, why is it addressed in the NEC for power levels above 60 W? There is still the potential hazard caused by heat being generated by PoE within cable bundles that can cause insertion loss and cable degradation over time, preventing proper data transmission. And with everything from phones and security devices, to life safety systems connecting to and being powered over the network, a loss of signal can certainly become a life safety issue. That’s one reason why the NEC specifies the number of cables allowed in a bundle based on conductor size and temperature rating for 60W or higher PoE or requires the use of Limited Power (LP) cable.

There are ongoing discussions surrounding fire safety when it comes PoE.  While it’s theoretically possible, it would take an absolute worst-case scenario—a large tight cable bundle all simultaneously delivering high-power 60W or higher PoE in a hot ceiling space (above 40°C) from one point to another without breaking out to smaller bundles/individual runs. It would also likely take low-quality unshielded cable construction (e.g., copper-clad aluminum) in close proximity to combustible material. Such a scenario can be avoided by following bundling guidelines and certifying (which will not pass CCA cabling).

It’s important to remember that even if there’s no danger, PoE can still wreak havoc on transmission if the cable isn’t properly balanced. In four-pair Type 3 and Type 4 PoE, power is delivered over all four pairs with data via common-mode voltage that splits the current between each conductor in the pairs. For this to happen, DC resistance must be balanced. Too much unbalance causes saturation of the transformer, which can cause Ethernet data signals to become distorted. That’s why we recommend testing for DC resistance unbalance using your DSX CableAnalyzer™ Series tester. Learn more about DC resistance unbalance testing here.

Learn more about the DSX CableAnalyzer