Lately it seems that there is a lot of attention surrounding digital lighting and the ability to power and control LED lights over the network infrastructure using Ethernet-based technologies like TCP/IP and PoE. While the benefits of LED lighting are becoming well known – energy efficiency, reduced installation and maintenance costs, and integration with IoT – there’s yet another benefit looming on the horizon.

Maybe you’ve heard the term “Li-Fi” and what may seem like a far-fetched, cockamamie ability to send data using the lights above our heads, but it is an actual technology that is actively being developed. And while it may not be ready for prime-time use for another few years, Global Market Insights predicts that the Li-Fi market could be worth $75 billion by 2025, so it is definitely a potential disrupter worth keeping our eye on. 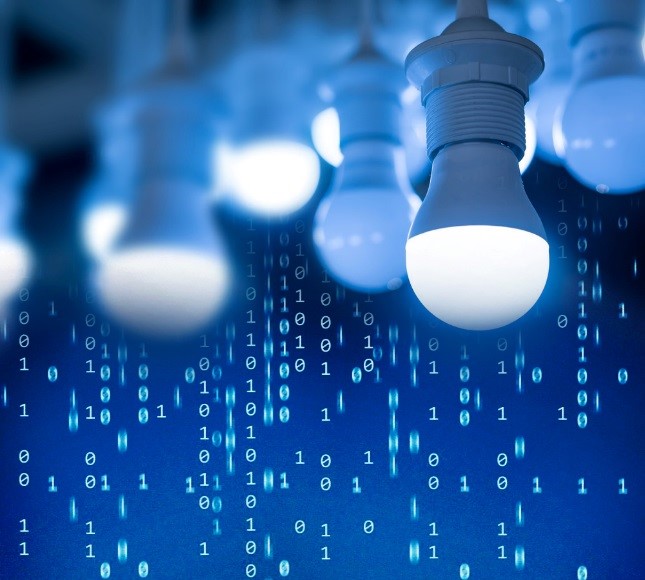 How Does it Work?

Unlike Wi-Fi that uses radio frequency (RF) signals to transmit data from a wireless access point, Li-Fi uses visible light to transmit data. Before you dismiss the idea as absurd, consider the fact that for decades we have been using light to communicate over short distances since it’s the main technology used in home controls. That’s right. Every time you use your TV remote to change the channel or turn up the volume, you’re using light to communicate. But unlike the infrared light used by your TV remote, Li-Fi also uses visible light communications (VLC), enabling the dual purpose of illumination and communication.

The latest developments in VLC relies on LEDs.  Because LED lights offer instant on/off functionality, they can be turned on and off so quickly (we’re talking nanoseconds) that the flickering can be translated into data by photoreceivers. And we’re not talking about the annoying flickering we’ve all experienced with a problematic halogen light. The light flickering that happens with VLC is so fast that you can’t see it.

What is the Potential?

While the proof will ultimately be in the pudding (when it’s served), the recent claims are that Li-Fi will deliver multiple Gigabit speeds and low-latency communications. The visible light spectrum is after all about 10,000 times larger than the RF spectrum. VLC is also not susceptible to interference from external devices, which makes the technology appealing for use in hospitals, power plants, airplanes and other locations where RF signals are prohibited.

Because VLC does not travel through walls and other barriers, Li-Fi can be contained to a physical space for better security. This is however the same characteristic that is also typically seen as a downside. While light can bounce off surfaces within a room, it can’t travel through any substances the way Wi-Fi can.

You may also be wondering how Li-Fi can work in the presence of bright sunlight, and one would assume that it won’t work in the dark.  According to proponents and developers, the modulated light used in VLC can still be detected in the presence of other light and receivers can filter out the constant non-flickering light from the sun. And while it obviously won’t work if the lights are powered off completely, Li-Fi can work at such dim light levels that the room will appear dark to the human eye. There are also options being developed for using the invisible part of the light spectrum, such as infrared for uplinks from mobile devices.

When Can we Expect It?

While VLC is a new technology, it isn’t exactly a new concept. Alexander Graham Bell invented the photophone in the 1880s that transmitted speech over a beam of light, but it never took off due to the invention of the telephone and the use of RF that could penetrate substances. It took more than a century for the technology to once again gain momentum, and R&D has ramped up significantly over the past five to six years.

Several companies recently came together to form the Light Communications Alliance (LCA) to promote wireless light communications, and researchers at the University of Oxford claim they have achieved bi-directional speeds of 224 Gb/s using Li-Fi. The IEEE also announced the creation of the 802.11bb Task Group on Light Communications to focus on enabling communications in the light medium, and the standard could be released as early as 2021 (however late 2022 might be more realistic). Despite a lack of a standard at this time, Li-Fi technology is already starting to enter the mainstream with Dubai planning to be the first city to use Li-Fi in its street lights and several trials taking place across the globe.

It’s important to note that Li-Fi is not expected to replace but rather complement RF-based wireless communications like 5G and Wi-Fi. While it remains to be seen just how the technology shapes up, one can only assume that testing will be something akin to Wi-Fi testing but using light wavelengths instead of RF of course. And you can rest assured that Fluke will continue to stay on top of the Li-Fi technology revolution.  Need a tester for PoE? Check out the MicroScanner PoE!