It’s That Time of Year Again – Beware of Ghosts and Dead Zones!

There’s a chill in the air, leaves are falling and it’s time for all things spooky. So we thought that in the spirit of Halloween, we would post this blog again that takes a look at two of the most confusing (and perhaps scariest) OTDR events--ghosts and dead zones.

When You See What Doesn't Exist

By now you should know that an OTDR calculates signal loss based on the amount of reflected light, or backscatter, that it detects. Connection points along the fiber demonstrate a large reflection, which is used to determine the return loss of the connection. When there is a poor connection, light can bounce multiple times between events. Not only will light be reflected back towards the OTDR, it will also reflect in the opposite direction towards the far end, which is then reflected back again.

The result of these "echos" of light bouncing back and forth between events are non-existent events that show up on an OTDR trace. These ghosts are pretty spooky--you can see them on the trace, but they aren't really there.

If you're not a highly experienced OTDR user, it can be difficult to identify a ghost from a real event by looking at just the trace itself. Events that exhibit no loss or show repetition an equal distance down a trace are probably ghosts. Thankfully there's no reason to be scared since Fluke Networks' OptiFiber® Pro identifies cable and fiber ghost events and ghost sources.

But it you really want to be a "Ghostbuster" this Halloween, make sure that all your fiber connections are properly cleaned, properly mated and are of a good quality before testing. 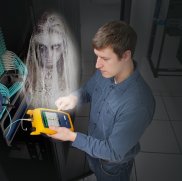 Don't Stay There Too Long

Just like it takes your eyes a minute to recover from a bright light, OTDRs can also become temporary blinded by a high reflective event. The amount of time it takes the ODTR to recover is the source of what’s called the “dead zone”--either an event dead zone or an attenuation dead zone.

Short dead zones enable OTDRs to accurately detect consecutive and closely spaced events in a link. Other than avoiding the risk of being eaten by zombies, shorter dead zones are preferred to make sure all connections are

identified and calculated, which is especially important when you consider the number or shorter fiber jumpers used to make connections in today's virtualized data centers.

And Happy Halloween from all of us at Fluke Networks.