Home > Community > Blog > Get Reel Before You Install!

Get Reel Before You Install!

It’s obvious why you might want to test reel of cable before you commit your time and resources to installing it. While it would be nice to think that every reel of cable coming out of the factory is in perfect condition, that’s not always the case. Furthermore, what’s not to say that the reel wasn’t damaged during shipping and handling? Just imagine testing the cable plant after installation only to find out that the cable is faulty—now that’s time and money lost! 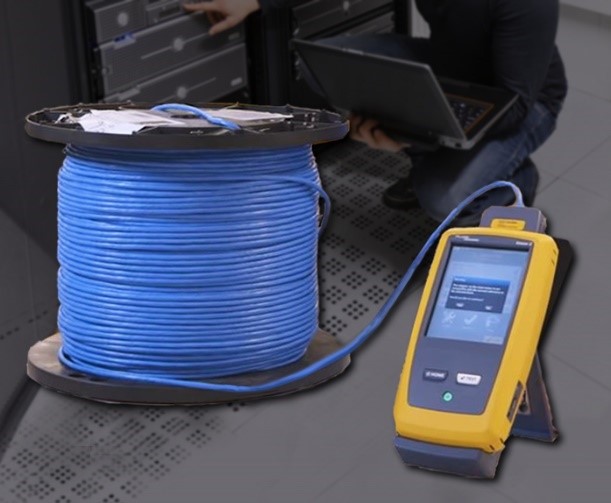 Testing and documenting newly-delivered spools can also let you determine reel-to-reel consistency to keep your cabling vendors honest. Not to mention that it can help determine the cable was mishandled during installation, refuting blame by giving you proof that all was good before installation.

But how do you test a 1000-meter reel of cable with no access to the far end? You may not be able to test for all parameters, but you can certain test enough to know if you should install it. Let’s review.

When testing a spool of twisted-pair copper cabling, the latest firmware for your Fluke Network DSX CableAnalyzer™ Series tester has a test option called “Single Ended Cable” available under “Other” in the test limits. But before you even get to that point, you need a way to connect the cable to the tester.

When cable vendors test spools of cable, they use a lab adapter with their DSX. While this is the preferred method for spool testing, it’s a bit more time consuming to terminate the cable and ensure to maintain proper pair twist. Not very practical for testing dozens of reels that just showed up at the job site. 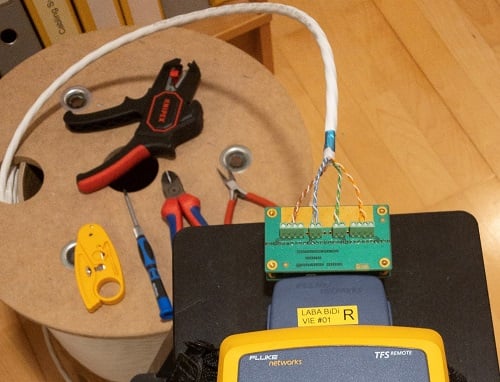 The easier option is to just use a field-terminated plug on the end of the spool and use a channel adapter. With a channel adapter on one end, you won’t be looking at the plug performance anyway. Note that you will get an error on your DSX as it thinks you need a lab adapter for the Single Ended Cable option. But just go ahead and continue the test.

When you test the reel using this method, you’ll be able to determine the distance (which is handy when you’re not sure how much cable is left on a partial reel), as well as values for near-end crosstalk (NEXT) and return loss (RL). There are a few things to consider when you’re testing a spool of cable. With a single-ended cable test, you’re not going to be able to determine insertion loss or far-end crosstalk since you’d need a remote unit on the far end for that. And you’re also not going to get very good return loss since the impedance is technically infinite with no end connection. But if your NEXT and RL fail, you’ve got yourself a “reel” problem.

Recommended for Fiber Too

Since fiber is even more susceptible to damage during shipping and handling, it’s not a bad idea to also test your fiber reels. Ideally you want to test from both ends, but that’s not always an option unless your vendor accommodates end-of-reel access with their spools.

While you can use an optical loss test set, an OTDR like Fluke Networks’ OptiFiber® Pro is recommended as it will give you a lot more information, including length on the reel, specific loss events and distance to any loss events cause by damage to the cable. But just like with copper, you also need a way to connect the fiber to your tester. The recommended and quickest method for fiber reel testing it to use a pigtail and a temporary fusion or mechanical splice to the fiber under test.

Once you’re ready to test, select Real Time Trace and set your wavelength. If you’re only going to run the spool test at one wavelength in the interest of time, it’s better to select the higher wavelength to better identify any problems. Longer wavelengths are more sensitive to bending losses.