Copper Keeping Pace with the Trace

When it comes to Tier 2 fiber testing, there are many smart people in our industry who can read an OTDR trace and pinpoint the type and location of a fault within the cable. And for those who might not be proficient in reading a trace, Fluke Networks’ OptiFiber Pro OTDR features advanced logic that automatically interprets the trace to provide a detailed and graphical map of events that includes the location of connectors, splices and anomalies.

It’s no wonder that with their detailed traces and event maps, most fiber techs think they’re pretty cool and have an edge over copper when it comes to troubleshooting. But in fact, copper is keeping pace with the trace.

Like an OTDR that shows results within the time domain, Fluke Networks’ DSX series copper testers feature High-Definition Time Domain Reflectometry (HDTDR) and High Definition Time Domain Crosstalk (HDTDX) analyzers. HDTDR shows the locations and magnitudes of reflections caused by impedance variations, which can be analyzed to determine the reason why category cable fails or gives a marginal result for insertion loss and return loss. HDTDX traces can be analyzed to locate the distance to and the source of near end crosstalk (NEXT) events. But when it comes to reading an HDTDR or HDTDX trace, this too can take a trained eye. 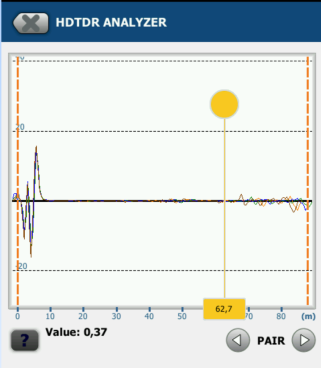 For example, in looking at the events in an HDTDR trace, there are two types to consider – bipolar or unipolar. A bipolar event contains a positive and negative characteristic, while a unipolar event is either positive OR negative. When using HDTDR, you may need to pinch and zoom to make the events more visible. Experienced users are interested in the amplitude and number of events in a trace. Internally we use a simple rule of thumb, if you have any events with and amplitude greater than 0.8% in the cable, especially if there are more than 4 of them, there may be a cable issue.

Return loss diagnosis is a matter of deduction, and a proficient HDTDR trace reader knows that the amount of return loss, if it occurs on one or all pairs and where it occurs along the cable can indicate different problems. The same holds true for analyzing an HDTDX trace. When a pair fails NEXT, a proficient HDTDX trace reader can determine if the problem is a termination issue and which connector is the problem.

When You Need a Map

Just like Tier 2 fiber testing, those technicians who aren’t proficient in reading traces might need a little help in interpreting HDTDR and HDTDX traces to determine the cause of failing links. Thankfully, there’s an easy-to-use event map for copper testing too. 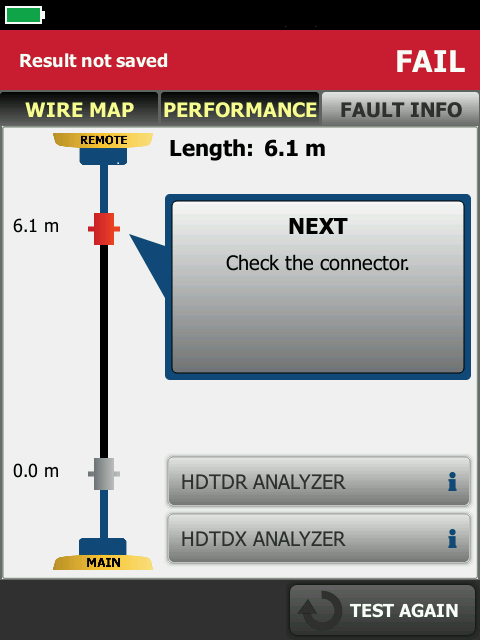 On the DSX series tester under the DIAGNOSTICS tab, the FAULT INFO feature interprets the HDTDR and HDTDX traces to show you distance to RJ45 connections in any link that is 100 meters long or less, and it will indicate the potential cause of insertion loss, return loss and NEXT failures. Potential faults detected include Insertion Loss failure due to lubricant or length and Return Loss failure due to a DC contact resistance issue, bad cable or water in the cable. Using the HDTDX technology, FAULT INFO can also detect NEXT failure caused by cable, a poor termination or non-compliant connector, or the use of too many connections for the link under test.

IIn addition to the potential cause and location, another unique feature of FAULT INFO is the ability to indicate specifically which problem to fix that will result in the largest improvement in NEXT. The connector marked in RED indicates that it is the largest source of NEXT.  Note that Since Fault Info is identifying the most significant source of NEXT and/or Return Loss, this doesn’t mean that it is the only event. Also, if you have a cable issue and a connector issue, Fault Info will first call out the cable. Yes, the connectors may be bad, but we don’t want you to waste time replacing them before fixing the cable.

So while long live the fiber vs. copper debate, copper troubleshooting with its traces and event maps is just as cool – if you have a DSX CableAnalyzer!