Cat 6A – A Bright Future Ahead

We all know that Category 6A is considered the highest performing twisted-pair cabling that supports 10 Gig speeds, and it’s been around now for more than a decade. So, you might be surprised to learn that Category 6 (now 17 years old!) continues to dominate worldwide sales of twisted-pair copper cabling. Although declining, even Category 5e that was introduced 20 years ago maintains a significant share of the market.

But when we consider cabling standards, PoE and emerging technologies, it’s getting more difficult than ever to make a case for installing and testing anything lower than Cat 6A. And now with wireless LAN users outpacing wired LAN users and a new wave of Wi-Fi promising speeds of nearly 10 Gig, Cat 6A might just get its day.

If you look at the latest cabling standards, you won’t find any recommendations for Cat 5e or Cat 6. In fact, all current TIA standards recommend Cat 6A for all new installations—including TIA-568 generic cabling standards for commercial buildings, the TIA-4966 standard for education facilities, TIA-1179 for healthcare, TIA-862-B for intelligent buildings and so on. And the same holds true for the latest ISO/IEC standards. In other words, if your customers are following the standards, they should be installing Cat 6A for any new project (something perhaps worth reminding them if they’re still specifying Cat 6). 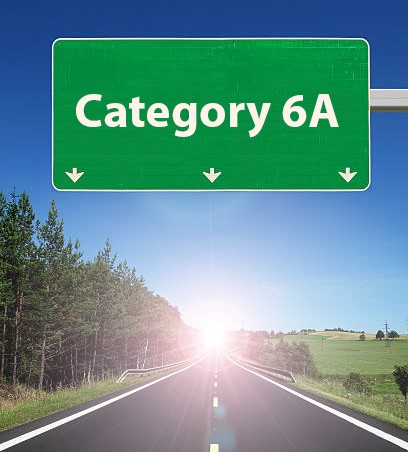 And it’s not just cabling standards. HDBaseT dominating the world of AV over twisted-pair copper cabling also recommends Cat 6A to reach the full 100-meter distance. You’ll only get to 10 and 40 meters for Cat 5e and Cat 6 respectively.

PoE Better Supported by It

With higher levels of power offered by Type 3 and Type 4 four-pair PoE, and PoE-powered devices like surveillance cameras and wireless access points now outnumbering traditional AC-powered devices, there’s yet another reason to deploy Cat 6A.

Something we’ve been talking about for a while now is heat rise within bundled cables carrying PoE, and Cat 6A does a much better job at dissipating heat compared to Cat 5e and Cat 6 due to its larger gauge size. That’s why to ensure a maximum 15°C temperature rise for 100 Watt PoE, TIA’s TSB-184-A Guidelines for Supporting Power Delivery Over Balanced Twisted-Pair Cabling, which is now integrated into the latest TIA 568.2-D standard, allows for about 25% more Cat 6A UTP cables in a bundle than Cat 6 and about 70% more cables than Cat 5e.

New Wave of Wi-Fi Requires It

Coinciding with the 2013 release of the IEEE 802.11ac standard for very high throughput Wi-Fi (known commonly as Wi-Fi 5), TIA released TSB-162-A Telecommunications Cabling Guidelines for Wireless Access Points that also recommends Cat 6A cabling for support of WLANs. While 2.5/5GBASE-T was primarily introduced to run over the installed base of Cat 5e and Cat 6 to support Wi-Fi 5 (that is, if it passes), Wi-Fi 6 is a whole other story.

Ratified this year, IEEE 802.11ax (Wi-Fi 6) offers 4X faster average throughput compared to Wi-Fi 5, and aims to ultimately deliver nearly 10 Gig per second speeds using link aggregation and double the number of spatial streams of Wi-Fi 5. The only way to support link aggregation and achieve the throughput potential of Wi-Fi 6 is to deploy two Cat 6A links to every access point.

So why is it that Cat 6 still dominates the market? Some of the reasons we hear are that it’s easier to install due to its smaller OD, it’s less expensive from a material standpoint and we simply don’t need 10 Gig speeds. But in the age of IoT as more systems converge and require higher speeds, as more users go wireless, and as more devices are powered via PoE – not to mention that growing adoption of Cat 6A will continue to drive down cost – NOT choosing Cat 6A could put customers at risk of having to replace Cat 5e and Cat 6 sooner rather than later. And that will cost more in the long run.

We get that you’ll still encounter some customers choosing to deploy Cat 5e and Cat 6 despite all the obvious reasons why they shouldn’t. And while Fluke Networks DSX CableAnalyzer™ Series Copper Cable Certifierswill test whichever category they choose (and test the installed base for 2.5/5GBASE-T), the future is looking pretty good for Cat 6A.