Since today’s high-speed fiber networks use 850-nm vertical-cavity surface-emitting laser (VCSELs) transceivers, some may be confused about why light emitting diode (LED) light sources are used for testing. Understanding the differences between these two sources will certainly shed some light.

When fiber was first introduced for 10 and 100 Mbps Ethernet, LED light sources were used with 62.5μm multimode fiber, also known as OM1. With an approximately 100μm spot size, an LED light source filled the 62.5μm core of OM1 fiber and the two worked well together for several years in 10 and 100 Mbps applications. But with the need for higher speeds, LEDs could no longer keep up—their maximum rate of about 622 Mb/s meant that they could not support 1 Gb/s or higher transmission. 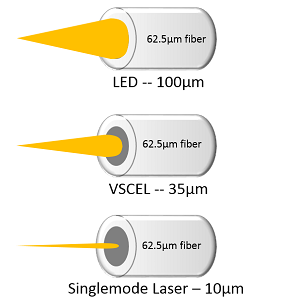 One option to support higher speeds was the laser type used in singlemode fiber applications, such as Fabry-Perot type lasers, but they were far too expensive for shorter reach 1 Gb/s transmission over multimode, and their tiny spot size of about 10μm rendered them impractical for anything but singlemode fiber.

Inexpensive 850nm VCSELs with more concentrated power and the ability to support higher data rates were developed as the answer, but with a smaller spot size (35μm) compared to that of an LED, they required a smaller core size of 50μm multimode fiber. And the fiber needed to be optimized for use with the VCSELs. That’s when OM3 laser-optimized multimode fiber was introduced, and then OM4 laser-optimized fiber with even higher bandwidth capabilities (check out our previous blog on the OMs).

Why the need for laser optimized? Not only do VCSELs underfill the fiber core, but they also do not excite all the modes (light paths) in a multimode fiber the way LEDs do. Nor do VCSELs excite the modes uniformly – a VCSEL’s power fluctuates and can vary from VCSEL to VCSEL. As a result, VCSELs excite different modes at different times, which can cause light pulses to arrive at the receiver at different times. The spreading out of these pulses, calculated as differential mode delay (DMD), adversely impacts bandwidth. To help minimize DMD and maximize bandwidth, laser-optimized multimode fiber features a graded refractive index profile that ensures that all modes arrive at the receiver at about the same time.

So Why Do I Test with LEDs?

Since VCSELs are the final light source used in a live fiber network, its seems counter-intuitive that one would test fiber links using LED light sources. But it’s really quite simple.

Compared to LED light sources that overfills the fiber core and excite more nodes, the underfilled launch of a VCSEL light source that does not excite as many modes. During testing, this can cause imperfections in the fiber core or high loss events such as a misaligned connection to be overlooked, which can result an overly optimistic loss measurement and the potential for a bad link to PASS. That’s why industry standards determined that an overfilled LED launch with pessimistic results is the better option.

While LEDs avoid the potential for a bad link to pass, when all the modes—higher order modes traveling away from the core and lower order modes traveling near the core—are excited, it can cause variations in the loss measurement and overly pessimistic results. In today's advanced 40 and 100 Gig multimode fiber links that have stringent loss requirements, pessimistic results are not an option and even minor variations can mean the difference between PASS and FAIL.

The best way to reduce variability and control launch conditions for the most accurate, repeatable testing results is with the Encircled Flux (EF) method of testing. Now required for multimode fiber testing by both TIA and ISO/IEC standards, EF testingmore precisely launches the light to better match the laser launch condition of a VCSEL without underfilling the core and delivering overly optimistic loss measurements. Fluke Networks’ CertiFiber® Pro optical loss test set is an EF-compliant tester.