With the release of the Version 6.2 firmware, the DSX-5000 and DSX-8000 Cable Analyzers have added tests for cables that you can only get to one end of. This is commonly used by manufacturers to test Category cabling while it is still on a reel or drum.

Formal testing of cable to comply with the relevant TIA and ISO component standards require that the cable be removed from a reel, are based on a length of 100 meters and have very specific requirements for the termination to be used at the end of the cable.

The formal test also requires tests that are double-ended, and include such tests as insertion loss and Far End Crosstalk.

The Single-Ended tests now included in the DSX only include NEXT and Return Loss as well as the length, Propagation Delay and Delay Skew. They also do not include wire map as it is not possible to run this test without a device connected to the far end.

One of the challenges to single-ended testing is the measurement of Return Loss. The measurement of a reflected differential mode signal on the cable is fine until you get to the unterminated end of the cable where the impedance goes towards infinite. This causes a very large reflection that does not represent the performance of the cable itself. We have been able to simulate an artificial termination to the cable to remove the effects of this unwanted reflection.

These limits are in the “Other” library of test limits. The “PCable” limits are for stranded cable.

These tests were created for lab users who may use an adapter customized for cable, hence the (LA) at the end of the test limit name.  There is a way to run these tests that can be useful for users outside of a lab environment, or those users in an environment where they have a need to measure a large number or reels of cabling. This method is to use a cable terminated with an appropriate RJ-45 plug for stranded or solid cable and running the test with the channel adapter. With the channel adapter the test starts just past the RJ-45 plug to remove the effects of the mated plug/jack connection.

Using this configuration with the channel adapter you will receive this Warning Message when you run the test, but it will allow you to continue. The warning occurs because you are using a channel adapter not an adapter customized for cable. 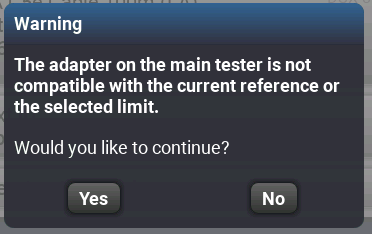 There are some challenges to this test. First, the TIA limits are based on a length of 100 meters, and cable on a reel typically has a length of 305 meters or more. Secondly, having the cable coiled on the reel has an unfavorable impact on the measurements particularly for UTP Cable. If you get a failing test result, that suggests that the cable may need to be looked at more closely with a double-ended test against component limits. With time and experience, manufacturers will become familiar with expected results for their cable and will be able to determine if they are getting correct values and when they need to take a closer look at a cable.