Wire Map Testing: It’s Not All About Color

Virtually every Ethernet cable tester can perform a wire map test - likely the most basic test for copper network cabling. Despite being a basic test, it is actually one of the most critical. And while the pair colors of blue, orange, green and brown might help you pass wire map testing, the test itself really doesn’t care about color at all.

What’s It Testing For?

While it doesn’t verify bandwidth performance to tell us if a cable plant can support a certain Ethernet application, wire map testing is the first test to even let you know that you have continuity and that each conductor of a four-pair cable is connected correctly to the corresponding pin at the far end. To do this, wire map testing tests for open, shorts, reversed pairs, crossed pairs and split pairs.

If the DC signal doesn’t reach the other end, the wire is open. If the signal crosses onto another conductor, there is a short between the two conductors.

Reversed pairs occurs when the polarity of one conductors is reversed at the one end (also called a tip/ring reversal). An example would be when the pair terminated to pins 4-5 on one end are reversed to 5-4 on the other.

A crossed pair occurs when the two conductors in a pair are connected to the position for a different pair at the other end. One example would be when the pair terminated at pins 3-6 on one end are terminated to pins 4-5 at the other.

The problem with a split pair is that a simple DC continuity test will still pass. However, a near end crosstalk test will fail – and it will fail significantly.

The color coded wires of a 4-pair cable – white blue/blue, white orange/orange, white green/green, white brown/brown – are there to help guide you when terminating. It’s pretty easy to match up the colors of the conductors to the colors on the jack.

But in reality, the wire map test really doesn’t care about the color of the wires—if you want to terminate the white brown/brown pair to pins 1-2, 3-6, 4-5 or 7-8, go right ahead. Just make sure they are terminated to the same pins at the other end.

While the wire map test doesn’t care about the color of the wires, it is important to use the same wiring scheme throughout – and following a wire scheme actually does have a lot to do with color. Pin/pair assignments are either T568A or T568B. The T568A wiring scheme terminates the orange pair to pins 3-6, while the T568B scheme terminates the green pair to pins 3-6. 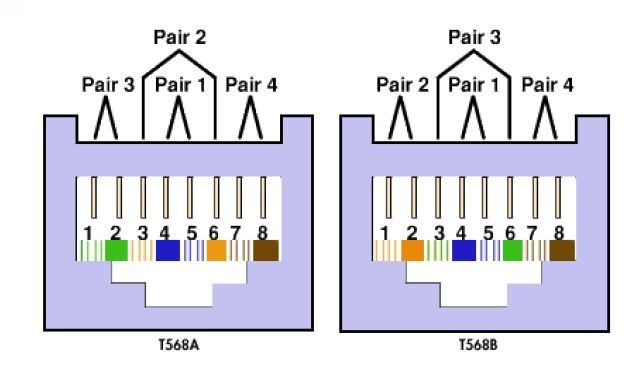 When it comes to troubleshooting failed wire map testing, your first step is to inspect the termination. It might be easy to see that the wires are not punched down correctly, connected to the wrong pins or simply broken due to stress at the termination point.

If the problem isn’t obvious at the point of termination, there could be a cut or break in the cable, which would also show the length of one pair being much shorter than the others. Or you may simply have a damaged connector.