What’s Wrong with My Cable?

While the most common causes of failures in twisted pair cabling include installation errors, defects found in poor-quality components (cables, connectors, patch cords, etc.), damage to the installed cable and incorrect tester set up, sometimes technicians want to know specifically WHY a link failed.

Based on which performance parameter failed testing, there are specific possible causes that a technician can consider. Let’s take a closer look.

Failures of the Five Wiremap Tests

When it comes to Wiremap testing that lets you know that you have continuity and that each conductor of a four-pair cable is connected correctly to the corresponding pin at the far end, there are five specific tests performed – Open, Short, Reversed Pair, Crossed Pair and split Pair. And each one of these has potential causes to consider. 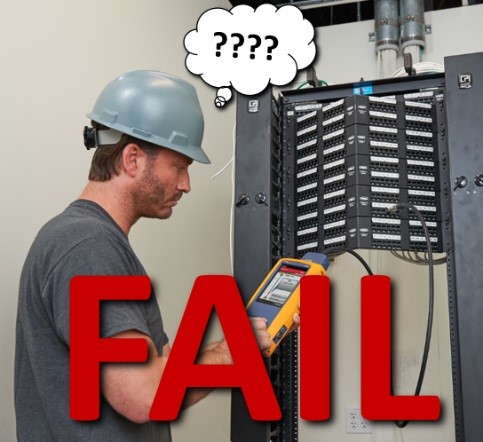 If Wiremap testing results in an Open, the conductors may be broken at a connection point, connected to the wrong pins at the far end or not properly punched down to make contact within the IDC tower. There’s also the possibility of a break in the cable or a damaged connector. A Short can also indicate improper termination or a damaged connector or cable, but it could indicate conductive material stuck between pins at a connection point.

Other Wiremap tests are easier to pinpoint the specific cause. In Reversed Pair, Crossed Pair and Split Pair results, the cause is almost always conductors connected to the wrong pins at the far end. A Crossed Pair result can also be caused by mixing 568A and 568B wiring (more on that here) or the use of crossover cables.

Length Failures Beyond the Obvious

While one might think that exceeding length limits obviously means that the cable is too long, that’s not the only potential cause. Another cause could be that the NVP is set incorrectly. NVP, which stands for nominal velocity of propagation, characterizes how fast a signal is traveling down the cable relative to the speed of light in a vacuum, and it is what allows the tester to calculate the length of the cable. Expressed as a percentage, NVP is set using the NVP specification provided by the cable manufacturer. And if it’s not set correctly for the cable under test, you might exceed length limits.

When length reported is shorter than the known length, it could indicate a break in the cable. And if one or more pairs is significantly shorter than the others, there could be cable damage or a bad connection.

Causes of the Losses

For Return Loss failures, there are several causes to consider, most of which can be attributed to poor installation practices.  Patch cords could have been mishandled causing changes in impedance, cables could be kinked, or pairs untwisted. It is possible, however, than patch cord or cable impedance is wrong (it should be 100 ohms) or not uniform. Bad connectors or poorly matched plugs and jacks can also cause Return Loss failures. And don’t rule out testing issues – you need to make sure the correct autotest is selected and that your link adapters are working. And if you have an unexpected Return Loss PASS, remember that knots and kinks don’t always cause a failure, especially with good quality cable.

Insertion Loss, the loss of signal that happens along the length of any cable, can be a littler easier to pinpoint. Since insertion loss is directly related to the length of a link, one cause could be excessive length (failing Length testing is a pretty good indicator).  Insertion loss failures can also be caused by non-twisted or poor-quality patch cables, high impedance connections or use of the wrong category of cable for the application being tested. And once again, you’ve got to make sure the correct autotest was selected for the cabling under test.

If your cable link fails or nearly fails near-end crosstalk testing (i.e., NEXT and PSNEXT), in addition to poor quality components, you might be looking at an installation issue. Excessive compression caused by inappropriate bundling practices such as the use of plastic cable ties can cause near-end crosstalk, as can too much untwisting at connection points, split pairs or the inappropriate use of couplers. But beware – using the wrong link adapter on your testing or testing near an excessive noise source could also be the problem.

If you fail far-end crosstalk (i.e., ACR-F and PS ACR-F), general rule of thumb is to troubleshoot near-end crosstalk problems first – correcting those will almost always correct far-end crosstalk problems. And when it comes to failing alien crosstalk testing (i.e., ANEXT, PSANEXT, AACRF and PSAACRF), this too could potentially be fixed by addressing near-end crosstalk issues first. But it could also be a result of unbalanced cable, meaning the design of the cable is such that conductors are not properly balanced to be able to cancel out injected noise. Failing Transverse Conversion Loss (TCL) or Transverse Conversion Transfer Loss (TCTL) mode conversion parameters is an indicator of poor balance and often corresponds to failed alien crosstalk testing. You can learn more about these mode conversion parameters here.

Last but not least, if your cable fails DC Resistance, you may have excessive cable length or poor connections due to oxidized contacts or marginally attached conductors. It’s also possible that you’re using too small of a cable gauge, a poor-quality cable with variations in its geometry or a cable type you really shouldn’t be using, such as copper coated aluminum (CCA), copper coated steel and other non-standard conductors. The resistance on some of these cables can be 55% greater than a quality solid copper cable of the same diameter, and this can cause greater heating of the cable in PoE applications. And besides, non-standard cables like CCA cannot legally be installed to meet National Electric Code fire safety ratings, resulting in code violations and increased risk of fire.

The good news is that Fluke Networks’ DSX CableAnalyzer™ series of testers include advanced and automated link diagnostics based on decades of Fluke Networks troubleshooting experience to help you pinpoint causes of failures, saving time over trial-and-error techniques. We’ll delve into these diagnostics in our next blog.