Home > Community > Blog > Upgrading to Four-Pair PoE: What You Need to Know

Upgrading to Four-Pair PoE: What You Need to Know

May 2, 2018 / General, Installation and testing, Upgrading and troubleshooting, Industrial Networks

For several years, you’ve been deploying cable plants that support power over Ethernet (PoE) for variety of devices like VoIP phones and security cameras. So far, up to 30 Watts is all you’ve been requested to support, but with the plethora of devices now able to take advantage of higher levels of PoE—like the latest 802.11ac Wi-Fi access points, digital displays and even desktop computers—your customers are starting to ask for four-pair PoE.

Maybe you’ve heard some buzz surrounding performance and heat rise concerns in four-pair PoE applications, and you’re getting a little worried about making sure the cabling plant you deploy is ready to power your customer’s whole new range devices. And you should be—the higher power levels of four-pair PoE don’t come without caveats. 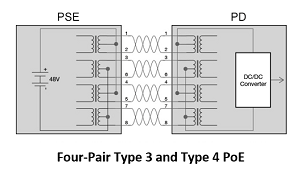 Time to Keep a Balance

In Type 1 and Type 2 PoE using Alternative A, power is transmitted by applying a common-mode voltage on the two pairs—meaning the current is evenly split between the two conductors. For this to happen, the DC resistance of each conductor in the pair must be balanced (equal), and any difference is referred to as DC resistance unbalance. Too much unbalance can distort data signals, causing bit errors, retransmits and even nonfunctioning data links.

Thankfully, Fluke Networks’ DSX CableAnalyzer™ Series of Copper Cable Certifiers quickly and easily tests DC resistance unbalance within a pair and between pairs, so you can rest assured that the cable plant you deploy will perform in two- and four-pair PoE applications.

Unfortunately, DC resistance unbalance isn’t the only thing you need to worry about. When PoE is delivered over twisted-pair copper cabling, increased temperature within the cable can increase insertion loss. This can cause a channel to fail insertion loss testing or require the length of the cable to be reduced.

Heat generated by PoE is even more of an issue when multiple cables delivering PoE are together in a tight bundle—and the higher the power, the greater the heat. The National Electric Code specifies the number of cables allowed in a bundle based on conductor size and temperature rating for 60W or higher PoE. UL has also introduced a Limited Power (LP) rating that verifies cables do not exceed their temperature rating for a certain current per pair, and TIA is also developing guidelines for limiting temperature rise in a bundle.