There’s an ad that says, “We know a thing or two because we’ve seen a thing or two.”  With billions of links certified by our testers and something like five more every second of every business day, we’ve seen just about every possible cabling problem.  Which means we’ve seen plenty of bad cable.

We’re talking about cable that is bad, off the spool before the installer has even had a chance to touch it.  This is not a common occurrence, but it’s something we’re prepared for and you should be, too.  The vast majority of the time, it’s because someone cut corners and went for the budget special from some unknown manufacturer, but even reputable manufacturers have slipped up.  Here’s an example that came into out Technical Assistance Center (TAC) just last month.

The contractor contacted us because their tests were failing.  They provided us the complete test results in .flw “LinkWare” format with graph data – always recommended in case you need our help in tracking down a problem.  Out of a total of 95 tests, six had failed and twelve had passed with a “PASS*”.  The asterisk on the measurement indicates that while the result was better than the selected limit, it was within the accuracy of the tester.  As an example, see the first graph.  You can see that the Return Loss (RL) result for the 3-6 pair (green) gets very close to the limit line (red) at about 350 MHz.  In fact, the LinkWare report shows that the measured value at 352.0 MHz is within 0.4 dB of the limit line.  The DSX measurement uncertainty is greater than 0.4 dB, meaning there is significant uncertainty as to whether the measurement actually passed, leading to the “PASS*” notification. 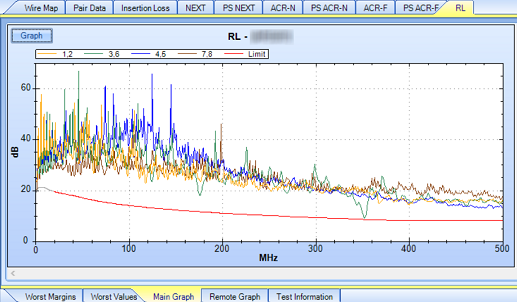 One thing that happens is that when customers see a high number of failures, they suspect the tester.  (You would think that would make us feel bad, but trust me, we do the same thing here.)  Concerned about the tester, this customer ran a number of self-tests, connecting the Permanent Link Adapter on the main unit directly to the channel adapter on the remote.   In every case, the margin was in the range of 13-15 dB, far beyond the margin of error.  This confirmed that it  wasn’t the tester or the adapters. (It almost never is.)

Now nerds like us think these graphs are cool and enjoy trying to figure out the problem based on them.  And when you’ve “seen a thing or two”, like our TAC team, they can often figure out the problem from this diagram.  They will tell you that the “dips” in the RL performance is indicative of a problem with the cable.  But while they get a kick out of tracking down a difficult mystery, and showing off their experience, real customers would prefer to cut to the chase.

That’s why our testers have a couple of diagnostic features built-in: High Definition Time Domain  Reflectometer (HDTDR) and High Definition Crosstalk Analyzer (HDTDX).  These pinpoint the location of the reflection or crosstalk along the length of the cable.  In this case, the HDTDR looked like the second graph.

Can you spot where the failure is?  No?  That’s because it’s all along the length of the cable.  Most of the time, the failure is a bad connector or installation job, and a spike will show up in that spot and you’ll know what to repair. When it looks like this, it means that the cable is bad, and the only way to fix it is to replace it with something better.  So it’s understandable when someone looks for something else – such as the tester itself – to blame.

The DSX has an even easier way pinpoint failures on a link – a feature called FaultInfo.  When a link fails, just touch the “Diagnostic” tab  on the screen to see a simple explanation of the issue as shown in the figure at right.  Our TAC thinks that takes away the challenge and the chance for a good story.  But unlike me, you don’t get paid for telling stories.

Our local Sales Manager provided the last clue to this case after finding the diagnosis.  His response (minus some of the more, um, colorful terms), provided the final piece of the puzzle: “Before this came up, I convinced [their distributor] to stop selling that stuff, so I was surprised when the contractor told me it was the cable. Turns out they bought this cable from a different distributor. They went low to win a bid and are now paying the price.”

One last note – if you suspect poor quality cable, you can test it on the spool or in the box before it’s installed.  Check out this video to see how: https://www.youtube.com/watch?v=-APuN2edUP0