Project managers spend a significant amount of their time managing cable IDs. A typical project has several hundred cable IDs. Large projects, such as Data Centers, can have 50k-300k IDs. When not managed carefully, these cable IDs can be incorrect, have inconsistent formatting, or be incomplete. Creating cable IDs on the tester can result in typos and inconsistent formatting, and can even cause the wrong test setup to be assigned to IDs. Contractors use multiple testers on multiple concurrent jobs to maximize efficiency, leading to a new set of issues. For example, cable IDs must be assigned to multiple testers and then results must be consolidated. These IDs could be duplicates or have inconsistent formatting, as they were created by different techs in the field. LinkWare Live not only allows a better way to manage cable IDs but also allows real-time visibility of the job status under these circumstances.

The ability to import cable IDs from Microsoft Excel or other similar formats (Eg. csv) and then synchronize them with the tester is a unique feature in LinkWare Live that addresses this pain point. A key benefit of this feature is that several hundred cable IDs can be easily created/formatted in Excel and then imported into LinkWare Live cloud with a single click. These can then easily be downloaded into multiple testers at the jobsite over Wi-Fi. This saves the Project Manager’s time during consolidating results into a report and minimizes mistakes. Certification reports with incorrect or incomplete cable IDs can lead to costly rework, delayed payment, and even loss of future business from your customers and cabling manufacturers. Paul Cox, a PM for Teknon who manages cable installation at some of the biggest data centers in the Quincy WA area, says, “I have saved hundreds of hours with this feature”

LinkWare Live lets you import cable IDs from a spreadsheet… try it! See a "how to" tutorial below.

To do this tutorial, you'll need LinkWare Live Professional on a tablet or PC and a spreadsheet application such as Microsoft Excel.

Import cable IDs from a spreadsheet

To format the IDs in the spreadsheet

To import the cable IDs in LinkWare Live 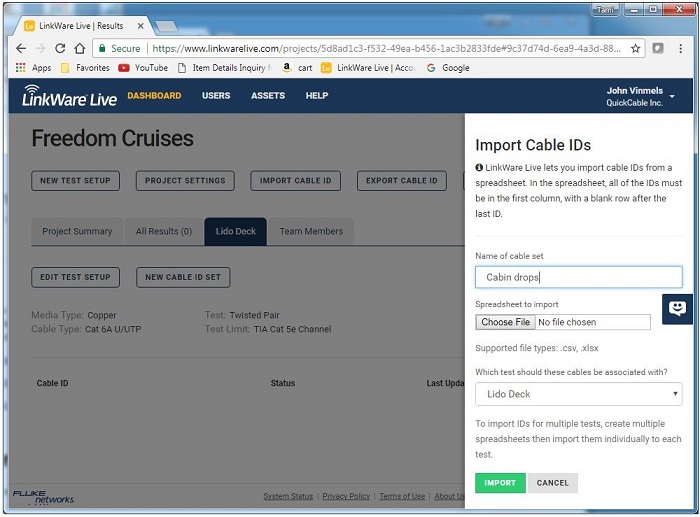 To import IDs for multiple tests, create multiple spreadsheets then import them individually to each test.

Export cable IDs to a spreadsheet