To some, it may seem like just yesterday that Fluke Networks introduced the Versiv™ family of Cabling Certification Testers, especially for those who are still hanging on to their discontinued DTX CableAnalyzer™ (don’t forget that all service and calibration for DTX CableAnalyzers ends this June 30th).

But believe it or not, it’s now the fifth anniversary of Versiv testers, including the DSX CableAnalyzer™, OptiFiber™ Pro and CertiFiber™ Pro certification testers.

While five years may seem a bit old for your phone, with its 3-megapixel camera that has no front-facing feature for all those selfies on the job site, it’s not that long at all for a modular design like Versiv that lets you continually add new capabilities without buying a new tester. That’s why Versiv has come a long way over the past five years, and it’s still going strong. 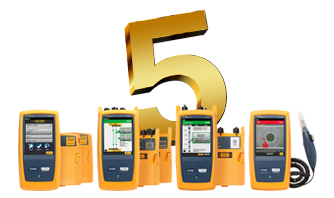 While Versiv took testing speeds to a new level and its ProjX™ management system has made setup fast and easy, over the past five years, it’s gotten faster than ever to setup and test with Versiv. LinkWare Live was introduced in 2014 for uploading results, and since then, uploading has gotten faster. And then we added the ability track the location of your Versiv testers, confirm the status of device software and calibration on all Versiv testers and set up test parameters – all remotely from any location transmitted via the cloud.

Versiv is smart, too, with decades of Fluke Networks troubleshooting expertise built right in. That’s why it can pinpoint a connector with too much crosstalk, cabling that doesn’t meet spec, and even – my favorite – water in the cable. While this blog’s readers are, of course, smart enough to recognize the signature of these errors from a Return Loss or HDTDX plot, not everyone on their staff can. And that’s a good reason to keep your Versiv updated (downloads are free, by the way) – we keep adding more smarts with every release.

Versiv tests are still fast – Category 6A tests in nine seconds, dual fiber loss tests in three. For you DTX owners, that’s three times and four time faster, respectively. And for OTDR testing – a whopping seven times faster. It also includes time-saving measures such as automatically starting a test when the remote is connected.

And when it comes to fiber testing, Versiv made testing smarter and faster than ever when we introduced SmartLoop™ technology that lets you perform bidirectional OTDR testing (as required by standards) on two fibers at once with instant averaged results – without moving the tester to the other end. And Versiv now automatically grades fiber endfaces in about a second (just try doing that manually!).

Since introduced, Versiv has consistently been updated with all the latest limits for existing industry standards, as well as new and emerging standards and applications. While the ability to test Category 8 cabling was one of the most noteworthy added capabilities of 2017, that’s really just the icing on the cake.

Versiv means you can now support advanced copper cabling measurements like TCL, ELTCTL and DC resistance unbalance, and applications like 2.5/5GBASE-T and 802.3bt Type 3 and Type 4 PoE. And if you’re already using Modular Plug Terminated Links ahead of the upcoming TIA- 568.2-D standard ratification, that’s not a problem as the latest Versiv firmware already includes the limits for this new topology. When it comes to fiber, if you’re now testing OM5, Versiv has you covered there too.

So Much More to Come

If you think that’s all the enhancements that have been made to Versiv over its five-year lifespan, think again. There’s so much more – from an increased number of cable IDs, enhanced notifications and software/calibration reminders and testing copper links up to 1km for spool testing, to a loss budget calculator for SYSTIMAX solutions and limits for dozens of other manufacturers’ cabling solutions. It’s impossible to list them all in this blog!

And if you think Versiv stops there, think again. With its modular design, swappable testing modules and superior product support, you can rest assured that Versiv has you covered for whatever comes next. Now that’s an investment worth making.