Home > Community > Blog > History of the RJ45: A Case of Mistaken Identity

History of the RJ45: A Case of Mistaken Identity

Our industry commonly uses the term “RJ45” to refer to the modular 8-position, 8-contact (8P8C) interface deployed for Ethernet over copper twisted-pair network cabling despite it pretty much being a case of mistaken identity.

But since the RJ45 name has stuck, we thought maybe we’d take a closer look at the history of this nomenclature and why to this day, it remains the de facto interface for twisted-pair Ethernet applications.

Jacks of All Trades

The “RJ” in RJ45 stands for Registered Jack, a standard designation that originated with the Universal Service Ordering Code (USOC) scheme of the Bell System back in the 1970s for telephone interfaces. The old telephone RJ you’re probably familiar with is the RJ11. The RJ11 uses a 6-position, 2-contact (6P2C) interface for one-line telephone services, and it’s what most of us grew up with in our homes. And if you come from the telephony world, you may also be familiar with the RJ14 and the RJ25 which use a 6P4C (4-contact) and a 6P6C (6-contact) for two-line and three-line service respectively. 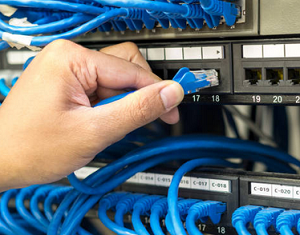 While the RJ designation technically only pertains to the wiring of the jack (i.e., the number of positions and the number of wires connected), the designations are commonly used to refer to the actual modular connector type regardless of wiring. This has created plenty of confusion.

For example, while the RJ11 is technically a single wire pair connection (due to its 2-contact status), the RJ14 and RJ25 use the same six-position modular connector, and the three are therefore physically identical despite the different number of contacts. This has caused all three of these connectors to be referred to as RJ11 connectors even though technically the RJ14 and the RJ25 are NOT RJ11s. 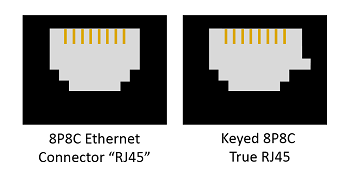 This is along the same lines of what now has us referring to 8P8C twisted-pair Ethernet connectors as RJ45. The early user of the 8P8C wiring was a keyed RJ45 used to connect dual trunk lines in the telephony world. When the telephony world started to run data over these connectors, the RJ45 name stuck.

However, a true keyed RJ45 is not entirely compatible with our current-day 8P8C twisted-pair Ethernet connectors; 8P8C plugs can plug into a true RJ45 outlet, but a true RJ45 plug cannot plug into an 8P8C Ethernet outlet (unless of course you cut off the little plastic tab that makes it keyed).

If the Shoe Fits

Since the original keyed RJ45 is rarely used, and most of us will never encounter these telephony connectors, it’s not really a big deal that we all use the RJ45 terminology for twisted-pair Ethernet connectors. After all, it’s the term we all know (and some of us love).

And it’s more than just a term. The RJ45 interface (or modular 8P8C interface if you’ve now decided to be technically correct) is also the de facto standard for twisted-pair Ethernet cabling because it’s a universally-recognized interface that enables backwards compatibility and interoperability.

That’s why the RJ45 has continued to be deployed as cabling systems have advanced from Category 3 to Category 5e to Category 6 to Category 6A. It’s also why TIA has adopted the ubiquitous RJ45 interface for the latest Category 8 cabling. And it’s what makes it easy for your DSX CableAnalyzer Series tester to handle any cabling system whether it is a Category 5e, 6, 6A or 8.